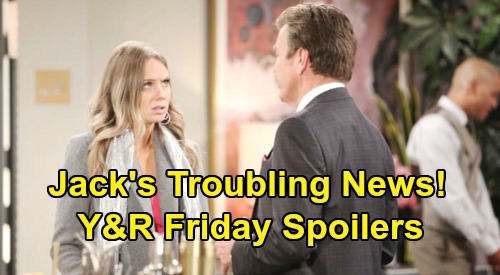 The Young and the Restless (Y&R) spoilers for Friday, February 28, tease that Victoria Newman (Amelia Heinle) will want some updates. Victoria awakens in Thursday’s Y&R episode with questions, but she knows one thing for sure: she doesn’t want Billy Abbott (Jason Thompson) around! She tells Billy to get away from her, so Nikki Newman (Melody Thomas Scott) will gladly enforce the no-Billy-allowed rule.

On Friday, The Young and the Restless spoilers say Victoria will be a little less groggy. She’ll manage to recover enough for a conversation about her health and the road to recovery.

Victoria will want someone to walk her through exactly what happened first, so Nikki may take care of that. She can bring Victoria up to speed on all the Ripley Turner (Christian Keyes) drama and identity confusion.

Victoria was busy bleeding on the floor and trying to fight for her life, so she wasn’t really able to keep up. She’s also been in a coma, which means her brain should be pretty foggy at first. Victoria will appreciate any details she receives about that horrible night. She’ll just be hoping to get a better sense of what went down.

Afterward, they can get down to the business of Victoria’s recovery and what that’ll look like. Nate Hastings (Sean Dominic) should be on hand to explain everything and tell Victoria what to expect.

This isn’t something Victoria can rush, but she won’t be happy about all the downtime. Victoria’s a workaholic, so she probably won’t like the fact that Newman Enterprises is now in a bind.

Other Young and the Restless spoilers say Jack Abbott (Peter Bergman) will have some troubling news to pass along. Will that involve all the chaos surrounding Billy?

Could it be about Kyle Abbott (Michael Mealor) and Lola Rosales’ (Sasha Calle) destroyed marriage instead? There’s even a chance this will be about Dina Mergeron (Marla Adams), but Jack will indeed share something disturbing on Friday.

Meanwhile, it looks like Abby Newman (Melissa Ordway) may be forced to wave the white flag. Thanks to Phyllis Summers (Michelle Stafford), lawsuits are piling up and Abby’s starting to feel like the hotel is cursed.

Abby seems to be on the verge of surrendering and selling her part of the Grand Phoenix, so Y&R fans can probably expect some gloating from Phyllis.