BY hellodrdavis on January 17, 2020 | Comments: one comment
Related : Soap Opera, Spoiler, Television, The Young and the Restless 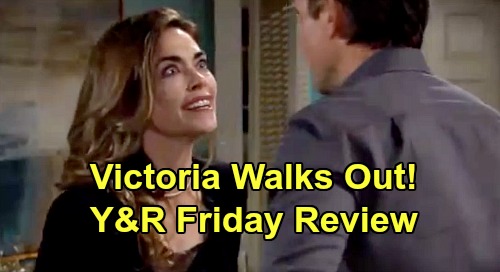 The Young and the Restless spoilers review for Friday, January 17, tease that Victoria Newman (Amelia Heinle) will meet with Nikki Newman (Melody Thomas Scott) at Society. She’ll be upset about the receipt that she found in Billy Abbott’s (Jason Thompson) coat. She’ll have looked up the bar online, which she’ll say looks like the place where you meet your demons. Nikki will advise Victoria to listen to Billy without judging or “helping.”

Meanwhile, at the dive bar, Amanda Sinclair (Mishael Morgan) will be worried when she hears from Billy that he lied to Victoria about them. Amanda will ask him why he lied, and he’ll say that it would have turned into a big thing.

Amanda will note that if he can’t be honest with Victoria then it’s time to ask himself why and that it’s time to talk to Victoria. She’ll say that if Victoria can’t accept Billy at his core, then he deserved to know.

Billy will head home, where he’ll find Victoria waiting. He’ll say that they should talk, and he’ll spill that he lied about the receipt the other night. Victoria will ask if Billy’s seeing someone, and he’ll say no, but that he’s going through some things.

Victoria will urge Billy to tell her what’s going on so they can fix it. Billy will say that’s the problem right there, and that she didn’t need to care so much.

That will seriously aggravate Victoria, and she’ll launch into a tirade about what Billy nearly did to Adam Newman (Mark Grossman) and how he melted down in the boathouse. She’ll get even more aggravated when she learns that Billy has been talking to Amanda about his problems.

Victoria will taunt Billy and sarcastically apologize for being such a burden to him. She’ll accuse him of loving chaos and of not loving her enough to talk to her. Ultimately Victoria will walk out, leaving Billy frustrated.

Meanwhile, on the new episode of Y&R on Friday, January 17, Sharon Newman (Sharon Case) will gear up to tell her girls about her cancer diagnosis. Nick Newman (Joshua Morrow) will arrive at Sharon’s place with Faith Newman (Alyvia Alyn Lind), who will immediately embrace her mom and apologize for snooping.

Sharon will reassure Faith that she’s not in trouble, then she’ll say that she has cancer. Faith will be upset and ask if Sharon is going to die.

Sharon will say that she’s not going anywhere, and Faith will learn that her mom will undergo chemotherapy and surgery. Faith will relay that one of her classmates’ moms had cancer, too, but she’s ok now. Sharon will suggest that Faith contact her classmate.

While Faith is doing that, Mariah Copeland (Camryn Grimes) will arrive and immediately realize that something is very wrong. Sharon will share her news, and Mariah will be stunned but will offer all of her support and help.

Later, Sharon will talk with both of her girls and tell them the importance of self-exams and taking care of their bodies, and they’ll head upstairs so Sharon can show then what a lump feels like.

Faith will say that she doesn’t want to go back to boarding school, and after a little cajoling, Sharon will agree that Faith can stay home for the time being. Rey Rosales (Jordi Vilasuso) will then have everyone join hands with Sharon in the middle, and he’ll deem them “team Sharon.”

Once everyone has gone, Sharon will seem pensive, and Rey will offer her comfort. He’ll try to tell her that she’s strong, but she’ll ask him not to say that, and she’ll admit that she lied when she told Faith and Mariah that she wasn’t scared. She’ll say that she’s terrified, and Rey will reassure her, saying that they’ll get through this.

Back at her apartment, Mariah will be visibly shaken by Sharon’s diagnosis. And at Nick’s house, he’ll find Faith crying and sad. Faith will say that she needs to snap out of it and be strong for her mom, but Nick will tell her that she doesn’t have to be any certain way. He and Faith will embrace, each clearly worried and consoling each other.