The Young and the Restless Spoilers: Lola Hooks Up with Theo, Retaliates After Kyle and Summer’s Lip Lock – End of ‘Kola’ Looms? 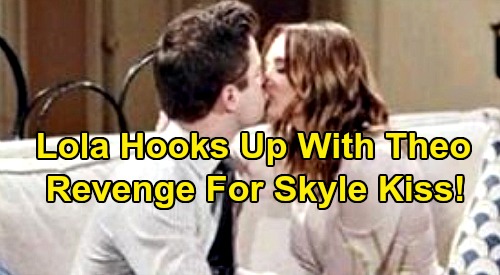 Although Theo seems to genuinely connect with and care about Lola, there’s no denying that a lot of this is about Kyle. Theo became interested in Lola because she’s Kyle’s wife. It’s doubtful he would’ve given Lola a second thought if she weren’t married to the cousin he’s feuding with.

Theo seems determined to be the better man on some level. It’s like he wants to overtake everything in Kyle’s world and be the winner. Kyle’s no prize these days either, but Theo’s driven him to this point. It’s no wonder Kyle’s spiraled out of control and setting his marriage up for disaster.

Without Theo in the mix, there’s a good chance Kyle and Lola would be perfectly happy right now. Kyle wouldn’t have felt the need to deepen bond with Summer, which is what he’ll do during the week of January 20-24.

Y&R fans can expect Kyle to kiss Summer, so this could be the beginning of the end when it comes to “Kola.”

Of course, we’re not giving Kyle a total pass here. Kyle’s lips are his own, and Theo doesn’t get to decide what he does with those. Even so, Theo isn’t a good guy and Kyle has excellent reasons to hate him. In fact, Kyle should have a few more soon.

Once Lola inevitably finds out that Kyle and Summer kissed, what will she do? Will Lola hook up with Theo to retaliate? The Young and the Restless could just go for a vengeful kiss, but it makes sense to take things a step further between Theo and Lola.

After all, that’s the kind of person Theo is. He always has to take things one step too far.

In other words, Kyle may strike the first major blow by planting a kiss on Summer. Lola may put the nail in “Kola’s” coffin by sleeping with Theo. The Young and the Restless writers seem to favor Summer at this point, so they won’t be eager to make her look bad in any of this.

That’s why Kyle’s initiating the kiss – and why Lola will likely be the one who potentially makes the biggest mistake of all.

Will Lola and Theo become a real couple down the road? Will Summer and Kyle reunite? The Young and the Restless spoilers say serious romantic changes may be on the horizon, so stay tuned.