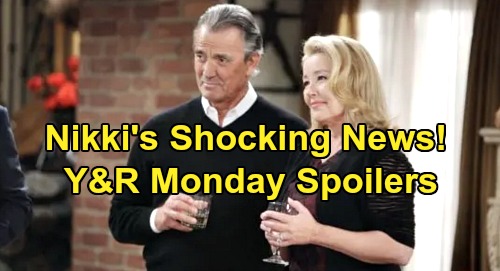 The Young and the Restless (Y&R) spoilers for Monday, January 20, tease that Nikki Newman (Melody Thomas Scott) will have a surprise in store. It looks like she’ll round up her family to share some big news. Nikki’s got a shocking announcement to make, which involves a project of some sort. This may be some sort of charity thing, but it’ll likely tie in with Victor Newman’s (Eric Braeden) legacy, too.

Braeden will celebrate 40 years on The Young and the Restless in February – and there’s a big party coming up for it. Of course, that also means Genoa City will need a reason to celebrate Victor. A shindig this huge will take some time to plan, so Nikki may need all hands on deck as she prepares for it.

On Friday, Billy comes clean about Amanda Sinclair (Mishael Morgan). He lets Victoria know that he’s been confiding in Amanda, which doesn’t go over well.

In Monday’s Y&R episode, Victoria will remain hurt that Billy’s been turning to someone he barely knows. It’s not as bad as an affair, but it’s a betrayal nonetheless. Billy’s been sneaking around and lying, so this is obviously a problem.

Even so, Victoria won’t be ready to throw in the towel. She loves Billy, so she’ll cool off and try to understand his perspective.

Sadly, Victoria won’t have much luck with that. Billy won’t be able to understand Victoria’s side of things either. He’ll still feel like Victoria judges him for his screwups, but don’t screwups deserve to be judged sometimes?

If Billy had been honest about his feelings from the get-go, maybe this situation would’ve have gone so far downhill. The Young and the Restless spoilers say reconnection will prove difficult on Monday. Victoria and Billy just won’t be able to get on the same page.

As for Kyle Abbott (Michael Mealor) and Summer Newman (Hunter King), they should be making final trip preparations. Kyle will have one last run-in with Theo Vanderway (Tyler Johnson) before he goes, which will leave him with growing fears.

Theo certainly can’t be trusted, so Kyle will worry Theo’s going to pounce on Lola Abbott (Sasha Calle) while he’s out of town. The truth is Kyle needs to worry about himself! He’ll end up kissing Summer on this trip, so he has no room to talk.

It sounds like some great drama’s ahead, so don’t miss all the action. We’ll give you updates as other Y&R news comes in. Stay tuned to the CBS soap and don’t forget to check CDL often for the latest Young and the Restless spoilers, updates and new.