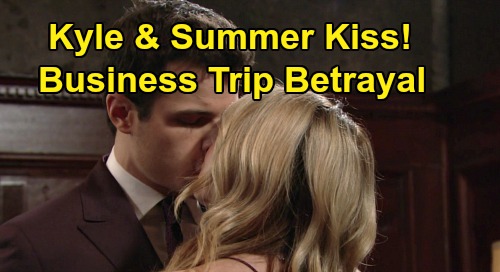 The Young and the Restless (Y&R) spoilers tease that Summer Newman (Hunter King) and Kyle Abbott’s (Michael Mealor) business trip will take a shocking turn. Y&R fans know something’s been brewing between these two for a while now. It was always just a matter of time until they crossed the line.

That moment is almost here thanks to this trip during the week of January 20-24. Things will start off innocent enough as Kyle and Summer actually focus on the task at hand.

They’ll lock down an important deal in San Francisco, so they’ll both be feeling great about that. Kyle and Summer will think this once again proves what a fantastic team they are.

Later, Summer and Kyle will likely do a little celebrating. They’ll at least take the time to relax after their business victory. The Young and the Restless spoilers say Kyle will get Summer talking about Theo Vanderway (Tyler Johnson) and how she really feels about him.

Kyle will wonder if they’re truly over, so Summer may admit they were over before they ever began. It’s clear that there was never a real commitment or true love between Summer and Theo.

From the get-go, Summer’s been trying to fill the void Kyle left in her heart. Naturally, Summer may not be completely honest about that part. She may just suggest that Theo’s on a different path than her, so it’s best not to get sucked back in.

Y&R fans can expect Kyle to feel drawn to Summer in these moments. Her vulnerability will move him, so he’ll let her know she deserves better than Theo. That’s when Kyle will make an impulsive move – one he may end up regretting soon after.

The Young and the Restless spoilers say Kyle will grab Summer and plant a steamy kiss. He’ll just go for it and set up plenty of trouble in the process.

Will Summer and Kyle make a pact to keep this lip lock a secret? If so, they could be making matters worse! Secrets have a way of getting out in Genoa City – particularly when sneaky guys like Theo are lurking and looking for ammo.