BY Heather Hughes on January 16, 2020 | Comments: one comment
Related : Soap Opera, Spoiler, Television, The Young and the Restless 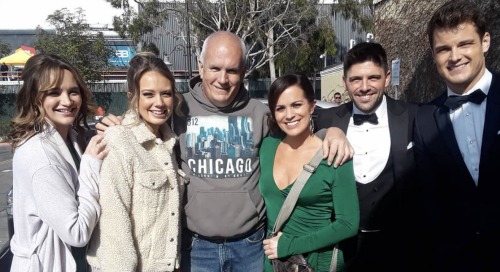 The Young and the Restless (Y&R) spoilers tease that Sharon Newman (Sharon Case) will have another supportive family member in town. Mariah Copeland (Camryn Grimes) will be there for her mom along with Faith Newman (Alyvia Alyn Lind), who’s opting out of boarding school to remain by Sharon’s side. However, Sharon also needs her son back in Genoa City – and thankfully, there’s proof of his return.

Thanks to a new Instagram post, we know Robert Adamson is reprising his role as Noah Newman. He can be seen in a tuxedo outside the studio, and a few of his glammed-up costars are also featured in the pic. It’s nice to know Adamson’s back on set and will be around for Sharon’s cancer storyline.

The Young and the Restless spoilers say the show’s planning a 40th anniversary celebration for Eric Braeden (Victor Newman), so that could tie in with a big event for Victor as well. It’s worth mentioning that Nikki Newman (Melody Thomas Scott) has something up her sleeve. She’ll make a surprise announcement soon – and it’ll involve a special project she’s working on.

That could be why Noah and several others will be dressed to the nines. Noah may end up attending some soiree to support his grandpa. Nevertheless, the main reason for Noah’s return will be to support Sharon and his sisters. It’ll be great to see some sibling bonding for Noah, Mariah and Faith. Sharon should find strength in having all her kids in GC, so that’ll help with her battle.

Of course, Noah can also catch up with Nick Newman (Joshua Morrow) for some father-son time. Nick’s staying strong for Sharon and Faith, but he has to be worried deep down. Having Noah around will certainly help Nick, too. The Young and the Restless definitely made the right call in calling Adamson up and asking him to make a Y&R comeback.

Are you glad Noah’s return is official? Are you looking forward to some family moments as Sharon fights a hard fight? We’ll give you updates as other Y&R news comes in. Stay tuned to the CBS soap and don’t forget to check CDL often for the latest Young and the Restless spoilers, updates and news.