BY Heather Hughes on March 26, 2020 | Comments: one comment
Related : Soap Opera, Spoiler, Television, The Young and the Restless 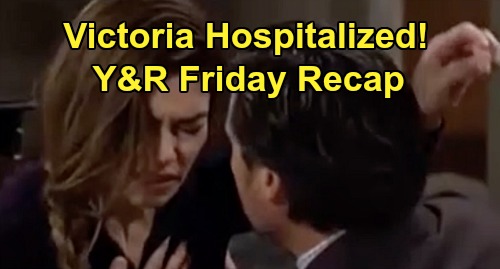 The Young and the Restless (Y&R) spoilers recap for Friday, March 27, teases that Victor Newman (Eric Braeden) will talk to Nikki Newman (Melody Thomas Scott) about his upcoming trip. Since the timing isn’t great for Nikki to leave town, Victor will insist on jetting off to Kansas alone.

Nikki won’t get why Victor has to oversee the repairs on the farm himself and will note his agitation due to Adam Newman (Mark Grossman) lately. Victor will brush that off and stick to his plan, so Nikki will just have to deal with it.

Meanwhile, Adam will get a call from Alyssa Montalvo (Maria DiDomenico), who questioned the coroner. It turns out the guy had a pretty strong reaction to Alyssa’s grilling session. Adam will speculate about Victor paying the coroner off.

As they mull over the new developments, Alyssa will suggest that her father killed for money while Adam’s father killed for protection – at least if their suspicions are right. Once Adam disconnects, he’ll assure Chelsea Lawson (Melissa Claire Egan) that he’s going to use this dirt against Victor. There would be major ramifications if this shocker was exposed.

Chelsea will question Adam about possibly having second thoughts, but he’ll stand his ground on going after Victor. Even so, Adam will battle concerns about what’ll happen if he’s wrong. This could start a war, so that’s something they have to be prepared for.

Chelsea will bring up the time Victor framed Adam for a murder he didn’t commit, which culminated in Adam being presumed dead in that cabin explosion. Y&R spoilers say Adam will ponder the outcome of his upcoming move. Adam will try to figure out if it’ll give him an advantage or if it might be his undoing.

After Chelsea reiterates that she supports Adam no matter what, they’ll kiss passionately. Once they’ve made love, Adam will determine that he has to go all in on this. He’ll hope to prove to Victor that they’re cut from the exact same cloth. Adam will want to show Victor that he’s more like his father than his siblings and end this war for good.

When Nick Newman (Joshua Morrow) shows up at the ranch looking to talk business, The Young and the Restless spoilers say Victoria Newman (Amelia Heinle) simply won’t care. Nick will be taken aback by Victoria’s lack of interest in Newman Enterprises’ latest deal. Victoria will confess that she’s feeling lost. All the fight’s been drained out of Victoria, but she’ll be upset since that’s not who she is.

Soon after, Victoria will struggle with chest pain and collapse to her knees on the floor. At Chancellor Media, Billy Abbott (Jason Thompson) will bring up the idea of throwing a big bash. Lily Winters (Christel Khalil) will want Billy to slow his roll. She’ll want to make sure they lock in more media outlets before they make a splash.

Once Jill Abbott (Jess Walton) shows up, she’ll be irritated with Billy over a tweet regarding a recent acquisition. Lily will pipe up that she was responsible. There’ll be some bickering over Lily’s podcast company meeting before talk ultimately turns to Jack Abbott (Peter Bergman). Billy will lash out at Jill for being pushy about checking in with his brother.

After Jill heads out, Lily will warn Billy to appreciate his still-living parent. She’ll reflect on the loss of Neil Winters (Kristoff St. John), so Billy will assure Lily that her dad would be proud of her. Since Lily knows all about Billy’s messy love life, he’ll want updates on hers.

Lily will admit she’s been dating someone, but she won’t have high hopes for it lasting. This long-distance thing probably isn’t going to work. Billy will contend that if Lily needs a wingman, she’s got one. Later, Nikki will call Billy with news about Victoria’s hospitalization. Once Billy hears what’s up, Nikki will suggest she’s filling him in because of the children.

After Nick learns they’re running tests on Victoria, he’ll bring Nikki up to speed. Nikki will worry that there may be a problem with Victoria’s heart. At the Abbott mansion, Dina Mergeron (Marla Adams) will be disoriented. She’ll spark some frustration for Jack, Traci Abbott (Beth Maitland) and Ashley Abbott (Eileen Davidson) as they try to make sure Dina’s content.

While Dina’s napping, Traci will bring out the documents that detail Dina’s final wishes. The Abbott siblings will read what Dina would like for her funeral as well as what she wanted each of them to know. Ashley, Traci and Jack will tear up over Dina’s words about pushing her family away. She didn’t know how to be a mother, but she’s proud of her kids turned out.

Dina’s letter will indicate that she feels she let Traci down the most. Since Dina didn’t go to Colleen Carlton’s (Tammin Sursok) funeral, that became a deep regret of hers. Dina feared she wouldn’t have a shot at reconciling with her loved ones. An emotional Jack will excuse himself to meet up with Jill. Jack will be grateful that Jill could come since he really needs a friend right now.