The Young and the Restless Spoilers: Victor Rocked by Blackmail – Surrender to Adam’s Demands or Murder Evidence Goes Public

BY Heather Hughes on March 26, 2020 | Comments: one comment
Related : Soap Opera, Spoiler, Television, The Young and the Restless 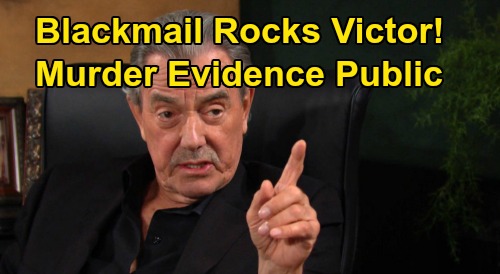 The Young and the Restless (Y&R) spoilers tease that Victor Newman (Eric Braeden) will be summoned to Crimson Lights for an important meeting. When Adam Newman (Mark Grossman) insist on talking to his father at the coffeehouse, Victor will instantly grow concerned. Adam’s invitations tend to come with an ulterior motive – and this time will be no different.

Once Victor arrives and sits down to chat, Adam will drag things out. He’ll want to savor every last moment of this power play, so that’s exactly what he’ll do. Adam will set the stage by reflecting on his complex relationship with Victor and how he’s perhaps more like his dad than his siblings.

All Newmans have a ruthless side, but Adam will think he’s more cutthroat than his brother and sisters.

Victor will undoubtedly agree with that, but what he’ll really want is for Adam to get to the point. The longer this takes, the more nervous Victor will become. Of course, “The Moustache” won’t let Adam see him sweat!

Victor will play it cool and just try to push Adam to move this process along. They might as well get to the bottom of why Adam called this one-on-one meeting.

When Adam’s good and ready, he’ll whip out an envelope that contains incriminating information. Thanks to Alyssa Montalvo’s (Maria DiDomenico) top-notch investigative skills, Adam will have shocking evidence to use against Victor. Whether or not Adam goes public with this info will be up to Victor.

Adam will present what he views as proof that Victor murdered AJ Montalvo. He’ll think the facts speak for themselves – and he’ll feel like anyone who sees this evidence would agree. Y&R spoilers say Adam will threaten to release the whole ugly story unless Victor agrees to his terms. Naturally, Victor will wonder what those terms are.

One of Adam’s demands will almost certainly involve kicking Nick Newman (Joshua Morrow) off the Newman throne. Adam will want to replace Nick as interim CEO, but what about Victoria Newman (Amelia Heinle)? Victoria’s set to take over again after she recovers, but Adam may nix that plan, too.

The Young and the Restless spoilers say Adam will feel like he deserves to lead Newman Enterprises, so he may take all his siblings out of the running permanently.

As for Victor, he’ll have to weight his next move carefully. Victor won’t know how far Adam’s really willing to go, but he needs to assume Adam will do what he claims.

In the end, Victor may temporarily give Adam what he wants and set up a little revenge of his own. The Young and the Restless spoilers point to Adam’s downfall eventually, so Victor will get the last laugh!

We’ll deliver updates as more Y&R news comes available. Are you on Adam’s side or are you rooting for Victor? Make CDL your hotspot for exciting Young and the Restless spoilers, news and updates.