BY hellodrdavis on March 26, 2020 | Comments: one comment
Related : Soap Opera, Spoiler, Television, The Young and the Restless 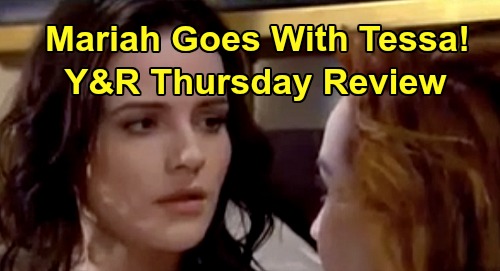 The Young and the Restless spoilers review for Thursday, March 26, tease that Adam Newman (Mark Grossman) will tell Connor Newman (Judah Mackey) that they’ll go to the ranch later, then Alyssa Montalvo (Maria DiDomenico) will drop by the penthouse. Alyssa will be all ruffled because Adam wasn’t completely honest with her. Adam will play along as Alyssa goes on about the possibility that both of their fathers are murderers.

Alyssa will say that she’s sorry for lashing out before, but that it was difficult thinking that her father could have killed someone, and she’ll tell Adam that they need to know the truth. Adam will pretend to question the wisdom of going on a search for answers, leading Alyssa to become determined to seek the truth.

Adam is certainly putting a lot of trust in Alyssa to do a thorough investigation, and to be discreet. He’s also assuming that Victor won’t get to Alyssa and manipulate her. We could see a situation where Victor manages to work behind the scenes to get Alyssa to “find” certain things, or a situation in which Victor manipulates the facts that Alyssa encounters.

Meanwhile, in Tessa Porter’s (Cait Fairbanks) hotel room, she and Mariah Copeland (Camryn Grimes) will enjoy their morning together. They’ll canoodle and make love, then they’ll discuss how they’re both imperfect and they will each make mistakes going forward. Soon, they’ll be lamenting about having to part ways, since Tessa will need to leave to go continue her tour.

Suddenly, Mariah will get an idea and she’ll suggest that she go on tour with Tessa. Tessa will love the idea, and they’ll later approach Tanner Watts (Chase Coleman) on the jet to ask him about the idea. He’ll think it’s great, and Mariah will say that there’s just one more person that she needs to get approval from – her mom.

Next, on the new episode of Y&R on Thursday, March 26, Sharon Newman (Sharon Case) will arrive at the ranch looking for Victoria Newman (Amelia Heinle). She’ll encounter Victor instead, and Victor will ask how Sharon is coping with her cancer diagnosis. Sharon will tear up, and Victor will take her hand. They’ll talk a bit about Victoria, then Sharon will wonder if something else is wrong with Victor. He’ll deny it.

Victoria will enter, and Victor will leave the women alone. Sharon and Victoria will start their first official session together, and Victoria won’t know what to talk about. Eventually, the conversation will steer toward their respective support systems, which will lead Sharon to ask about whether things are really over between her and Billy Abbott (Jason Thompson). Victoria will say with certainty that they’re done.

Sharon will then turn back to Victoria, who will be feeling tired. Victoria will admit that it’s not easy for her to tell people when she gets tired, because everyone thinks she’s worse off that she is. Sharon will say that she certainly understands that.

Later, Victor will be hanging out in the living room when Connor runs in, with Adam shortly behind. Connor will head off to the stables, leaving Adam and Victor to talk. Victor will want to know why Adam is really visiting, and Adam will say that he got the feeling that his apology the other day fell on deaf ears.

Victoria will listen in as Victor says that he knows Adam resents that he gave the temporary CEO position to Nick Newman (Joshua Morrow). Victor will insist that Victoria will resume when she’s recovered, and Adam will say that deeds are what’s important, not words…and that he plans on showing Victor and everyone else his true colors.

Thursday’s episode sounds great, so be sure to tune in! Remember to consult CDL for all your soap news – we’ll keep you informed as we get updates. You can count on us for the latest Young and the Restless news and spoilers.