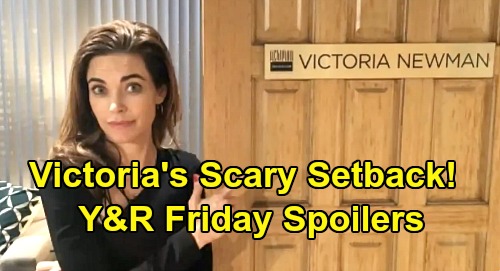 The Young and the Restless (Y&R) spoilers for Friday, March 27, tease that Victoria Newman (Amelia Heinle) will suffer a scary setback. Y&R fans know Victoria’s struggled in her recovery recently. This stabbing victim has plenty of emotional wounds to overcome in addition to her physical ones. It’s been tough for Victoria to deal with her trauma, especially since she’s so eager to get her life back on track.

Victoria recently dropped in the office and quickly realized she wasn’t ready to begin working again. Her family already knew that, but it’s good that Victoria had that moment of realization, too.

Even so, it’s hard for Victoria to step away from something she worked so hard for. Running Newman Enterprises was a dream come true, but now that dream’s been snatched away through no fault of her own.

Victor Newman (Eric Braeden) intends to give Victoria the CEO position back once she’s recovered, but she should know how the Newman clan operates by now. They’re as cutthroat as it gets when it comes to business.

Victoria may battle growing fears about not being able to reclaim her spot at the company, which is a very real possibility when you’re dealing with Victor and the dueling Newman brothers.

Of course, Victoria’s also been struggling to deal with her breakup from Billy Abbott (Jason Thompson), who was tied to her trauma in a way. Although Victoria doesn’t blame Billy for what happened, everything’s pretty tangled up in her mind. All of this could build to that setback we mentioned, which is coming up in Friday’s exciting Y&R episode.

Sharon Newman (Sharon Case) has been trying to help Victoria, but she can tell there’s a lot of pain under the surface. Victoria seems to be telling people what they want to hear.

Sharon’s putting on a brave face, but is she really getting better or is that just what she wants everyone to believe? It’s apparently the latter based on Victoria’s latest recovery obstacle, but let’s hope she get find a way to cope.

Other Young and the Restless spoilers say Nikki Newman (Melody Thomas Scott) will demand some answers from Victor. Since Nikki knows her husband better than anyone else, she can tell when something’s bothering him.

As Victor continues to fret over Adam Newman’s (Mark Grossman) digging and the buried Kansas drama, Nikki may just want him to come out with it already.

We’ll see how much Victor divulges, but he might keep the dirty details to himself. As other Young and the Restless updates become available, be sure to check back for the latest Y&R news.

Do you think Victor should be honest with Nikki? Should they face Adam’s threat as a team? CDL will have more Young and the Restless spoilers, news and updates to read up on soon!