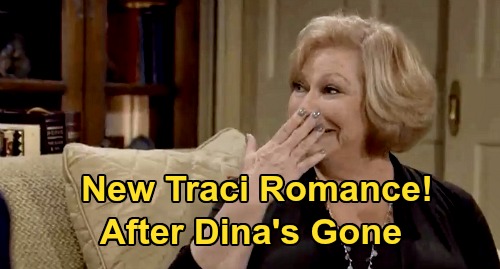 The Young and the Restless (Y&R) spoilers tease that Dina Mergeron’s (Marla Adams) upcoming death will bring a time of reflection for the Abbotts. This family will have to come together and mourn the loss, but the aftermath could bring some new beginnings. Dina’s demise could spark some signs of new life in a way. It’ll be an opportunity for the Abbotts to take stock and find a path forward.

Naturally, some new romances could get underway. Jack Abbott (Peter Bergman) still hasn’t found a lucky lady to build a future with. Ashley Abbott (Eileen Davidson) could also use more than just business and family in her world. Finding true love could certainly be on Ashley’s mind after she moves on from her grief.

However, let’s take a moment to focus on Traci Abbott (Beth Maitland) and what the future might hold for her. Many Y&R fans were disappointed when Traci’s blooming love story with Cane Ashby (Daniel Goddard) abruptly ended.

Although Cane arguably wasn’t a good match for Traci, it was nice to see Traci happy and treasured for a while. Cane reminded Traci that she was worth paying attention to.

Traci definitely deserves to be doted on, so it’d be great if The Young and the Restless could give us the next chapter. It’s clear that Cane sparked a change in Traci – a realization of what could still be.

Traci seemed to have given up on love until that storyline came along, but Y&R hasn’t followed up on the lesson she learned from it. There’s still time to do that, and it could actually fit with what’s ahead.

Dina wouldn’t want her loved ones to sit around moping for too long. Although Traci will need to grieve, she’ll ultimately be looking for a way to climb out of her funk. What could break Traci out of all the doom and gloom? Could a handsome new man walk into Traci’s life when she least expects it?

It wouldn’t be that hard for Y&R to cast someone for Traci and make this happen. Just a few episodes here and there would be enough. Of course, plenty of Young and the Restless viewers would like to see more of Traci, so they could keep the story going and show us updates along the way.

If Traci can sit down to chat with Lily Winters (Christel Khalil) and others, there’s enough airtime for her to have a few hot dates! It’s just a matter of Y&R actually making Traci a priority. Let’s hope for good news in Traci’s love life down the road. CDL will have other Young and the Restless spoilers, news and updates as they become available.