BY Heather Hughes on February 27, 2020 | Comments: one comment
Related : Soap Opera, Spoiler, Television, The Young and the Restless 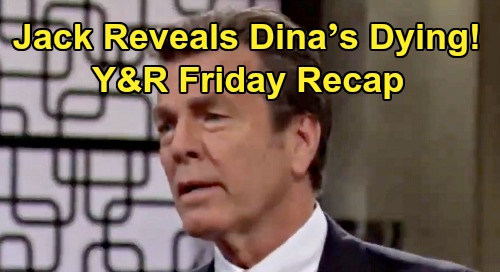 The Young and the Restless (Y&R) spoilers recap for Friday, February 28, teases that Victoria Newman (Amelia Heinle) will look to her family for answers. In her hospital bed, Victoria will ask who would hurt her like this. Nikki Newman (Melody Thomas Scott) will step out with Nick Newman (Joshua Morrow), who’ll be livid to learn Billy Abbott (Jason Thompson) was there when Victoria first woke up.

As for Victor, he’ll eventually join them and admit he didn’t give Victoria updates on Ripley Turner (Christian Keyes) since he’s still at large. Once Nate Hastings (Sean Dominic) appears, he’ll explain that Victoria can be released tonight. Nate won’t know for sure how long Victoria’s recovery will take at home – especially when it comes to her emotional trauma. That could take far longer to heal.

Next, Victor will speak with Nick about Newman Enterprises. When Nick learns Adam Newman (Mark Grossman) offered to take charge, Y&R spoilers say Nick will shut down the idea. Of course, Victor will point out that he can put anyone he likes on the throne.

Although Nick won’t approve of Adam taking over, he’ll refuse to get drawn back into the corporate world. After Nick exits, Victor will assure Nikki that Nick will come around. Across town, Jack Abbott (Peter Bergman) will stop by the Grand Phoenix with terrible news. He’ll fill Abby Newman (Melissa Ordway) in on Dina Mergeron’s (Marla Adams) declining health.

Jack will admit Dina doesn’t have much of an appetite anymore and sleeps all the time. He’ll think it’s time to prepare for the inevitable, since it’s apparent Dina’s dying. Abby will worry about how all this will affect Jack and Ashley Abbott (Eileen Davidson). Afterward, Abby will face off with Phyllis Summers (Michelle Stafford) over the lawsuits she set in motion. She won’t understand Phyllis’ strategy since they hurt her interest, too.

However, Phyllis will contend that she can get rid of the lawsuits. She’ll remain determined to secure Abby’s shares, but Abby won’t budge just yet. Later, Amanda Sinclair (Mishael Morgan) will eavesdrop on Abby, who’ll be firing her lawyer over the phone. Abby will turn down Amanda’s help since her new bestie is involved. She’ll rant about Phyllis and how she won’t let everyone think her rival won.

Amanda will urge Abby to really think about what’s best for her, not how everyone else will see it. Abby may have her own definition of winning. Once Amanda’s alone again, Phyllis will pop over for a chat. Amanda will wonder if the hotel’s truly worth all the hassle, but Phyllis will insist it absolutely is. She’ll explain that she put her heart into this place, but Abby robbed her of it just so she could enjoy her toy.

Phyllis will promise that Abby’s misery will continue until the Grand Phoenix is hers again. Suddenly, Abby will reappear with a round of drinks to celebrate. She’ll announce that she’s taking Amanda’s advice and will hand over her shares. Abby will add that she purchased the property across the street and intends to make the Grand Phoenix look like a beach shack.

Phyllis won’t be scared, so she’ll encourage Abby to bring it. Abby will fire back that it’s been brought! Over with Chance Chancellor (Donny Boaz), he’ll pay a visit to Adam and reveal his new plan. Chance will hope to locate Phyllis’ incriminating recordings and eliminate her leverage. He’ll admit he needs to get into Phyllis’ place to do that.

Adam will wonder if Chance is looking for his help, but Chance will merely want Adam’s approval. They’ll shake on it as Chance prepares to take the next step. At the Chancellor mansion, Kevin Fisher (Greg Rikaart) will be offered a new job. Kevin will question if this project is legal before Chance explains the recording situation. He’ll presume they can be found on a laptop and thumb drive.

Kevin will fear this is some kind of setup, but Chance will promise it’s a legit gig that he wants to handle privately. He’ll assure Kevin that nobody will know he was part of it. Once Chance writes down how much he’s paying, Kevin will decide they have a deal.

At Society, Jack will give Ashley a call about Dina. He’ll push his sister to come home before hanging up and speaking with Adam. The Young and the Restless spoilers say Jack will reflect on Dina before the conversation shifts to Victor.

Once Jack hears about Adam’s offer to make a Newman comeback, he’ll be supportive. Jack will advise Adam about dealing with Victor properly and stepping back down when Victoria’s ready to take the reins again. As for what happens next, Jack will think Adam should leave the ball in Victor’s court.