BY hellodrdavis on February 27, 2020 | Comments: one comment
Related : Soap Opera, Spoiler, Television, The Young and the Restless 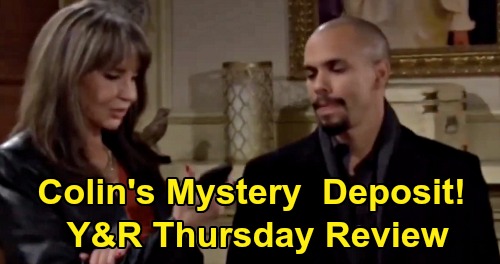 The Young and the Restless spoilers review for Thursday, February 27, tease that Billy Abbott (Jason Thompson) will arrive at the Chancellor mansion looking for Jill Abbott (Jess Walton), but he’ll find Chloe Mitchell (Elizabeth Hendrickson) instead. Billy won’t want to talk about the situation with Victoria Newman (Amelia Heinle), but Chloe will say that the man she knows would do anything to take Victoria’s pain away, and that if anyone says otherwise then they don’t know him.

From there, Billy will head to the hospital to see Victoria. He’ll arrive shortly after the coma-inducing medicine starts to wear off, and he’ll slip in the room to sit with Victoria when Nikki Newman (Melody Thomas Scott) steps out for a moment. Billy will tell Victoria that he couldn’t stay away, and that she needs to muster up the strength to come out of this.

Billy will go on, saying that he loves her, and Victoria will suddenly wake up. He’ll attempt to comfort her, but she’ll shrink away from him and tell him to get away from her and not to touch her. Just then, Nikki will come in and comfort her daughter while glaring at Billy. Soon, Nate Hastings (Sean Dominic) will come in to examine Victoria while Billy and Nikki step out into the hall.

She’ll then tell Billy that even though he thinks that he had some big epiphany, that he’s really in denial and that what happened to Victoria was a consequence of his actions. She’ll say that no matter how he spins this, he needs a meeting or at least an honest conversation with his sponsor. Billy will respectfully reply that she’s wrong, then Nate will return, but he won’t discuss her condition.

Nikki will go back into see Victoria, who will ask what happened to her. Nikki will say that they’d talk about that later, but for now she needed to regain her strength. Victoria will ask about Billy, but Nikki will say that he’ll never be allowed in this room again, as Billy watches from the hallway. Billy will then leave the hospital.

Meanwhile, on the new episode of Y&R on Thursday, February 27, Devon Hamilton (Bryton James) will get a mysterious text from an unknown number. The text will include a long series of numbers, which Devon won’t know how to interpret. He’ll call Chance Chancellor (Donny Boaz) who will be with Abby Newman (Melissa Ordway) at the Grand Phoenix to ask for help.

Chance will promise to meet Devon at Crimson Lights later, but first he’ll talk with Abby a bit about their relationship. They’ll decide that they’re in a good place, although Abby will do a considerable amount of ranting about the lawsuits that are piling up against the hotel – she’ll be sure that Phyllis Summers (Michelle Stafford) is behind it.

Chance will then head over to Crimson Lights, where he’ll take a look at the text the Devon received – he’ll be sure that it’s from Colin Atkinson (Tristan Rogers). They’ll ponder what the number sequence could mean, and Chance will spot Kevin Fisher (Greg Rikaart) typing away on his laptop across the establishment. After some prodding, Kevin will take one look at the numbers and know exactly what it could be.

Kevin will do a bunch of typing, and his suspicions will be correct – the numbers are for an offshore bank account that has $2.475 billion in it, in Devon’s name. Devon will then get a text saying, “money can make a person crazy, all apologies mate.” Chance will deduce that Colin’s feeling the heat and he knows he’ll get caught soon.

Chance, Devon, and Kevin will then head to the Chancellor mansion, where Jill will reveal that she got a text saying, “traveling the word without you isn’t the same.” She’ll soon learn that Devon got his money back, and she’ll be thrilled for him. Chance will then be startled to hear that Devon wants him to call off the police search for Colin. Devon will think that Colin has cut himself off from everyone he cares about, and that’s punishment enough.

Devon will head to Society where he’ll meet up with Elena Dawson (Brytni Sarpy) and Nate. He’ll spill the great news about getting his fortune back, and when Nate heads out to the hospital, Devon will chat more with Elena. He’ll marvel that he doesn’t know how to feel now that he has his money back, but that he wants to be better about who he helps with his money. Elena will say that she’ll love him no matter how much money he has.

It looks like it will be a great episode on Thursday, so stay tuned to Y&R. We’ll be sure to give you updates as more Y&R news comes in. Don’t forget to check back with CDL for all your Young and the Restless spoilers, updates, and news.