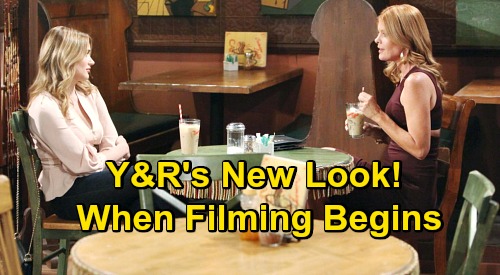 The Young and the Restless spoilers document that family conflicts and couple’s issues will be impacted by the safety protocols that must be put in place before production can officially restart. Every actor and behind the scenes Y&R employee will be affected as a result.

Fans are wondering how Genoa City, Wisconsin, will look when new episodes are shown. Y&R’s production was allowed to resume on June 12, but additional approvals are still lingering. So, classic episodes will continue to be shown for awhile.

It’s fair to discuss how temporary safety constraints will make this famous setting look different. In order to do that a variety of hypothetical situations can be explored.

Young And The Restless Spoilers – Couple’s Must Be Apart

Love is a major theme in daytime. Romances, engagements, marriages, the creation of families, breakups, dissolution, and the revival, or repeat of love’s patterns involve characters being physically close to each other.

Kyle Abbott (Michael Mealor) and Summer Newman (Hunter King) are back together. They are once again very close, at the office, out of the office, or wherever viewers see them. At Jabot, they’ll need to sit apart and if they are living in the same space, then each half of Skyle will need to be in a different part of the room.

Young And The Restless Spoilers – Conflict Resolution Handled Through Words

Conflict is another angle that’s often played in daytime. Heated dialogue can often serve as the lead in to some form of physical confrontation.

So, in the immediate future, Billy Abbott (Jason Thompson) won’t be going at it with whoever riles him up. Whatever disputes he creates at Chancellor Industries media division will need to take place in different parts of the office.

If Simon Black (Jeffrey Vincent Parise) breaks out of jail and returns to GC, he and Adam Newman (Mark Grossman) simply will not come to blows in response to what happened at the Grand Phoenix.

Nick Newman (Joshua Morrow) is known to have a hot temper. So, if some guy is talking to Phyllis Summers (Michelle Stafford), he’ll need to calm himself and not pop off.

This beloved set is the hub of the city. Any character, or background actor can be in Crimson Lights in any episode.

The central meeting place can still serve as a location where people meet to talk and, while having some coffee and a snack They can also accidentally meet there, as GC residents long have. But Sharon Newman (Sharon Case) will need to tell her staff to seat people far apart and make sure that no one lingers at the front counter.