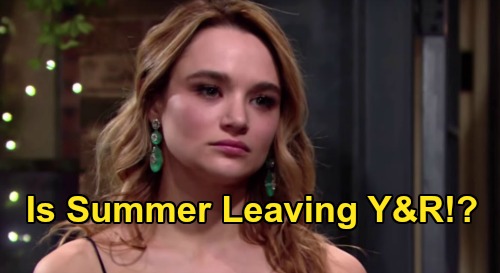 The Young and the Restless (Y&R) spoilers reveal that Hunter King (Summer Newman) could be headed back to primetime. According to Deadline, King has scored the lead role in a new ABC comedy pilot. This comedy, which is called ‘Prospect,’ is being promoted as “a comedic Western with a feminist twist.”

King plays an idealistic schoolteacher named Abigail Lansing, who trades her big-city life in Boston for life on the frontier! She moves to the western prairie town known as Prospect, where she envisions a schoolhouse full of eager little ones just waiting for their minds to be molded.

Abigail’s got big dreams and good intentions, but her plans hit a snag when she realizes it’s not children she’ll be teaching. Instead, Abigail discovers she’ll be teaching grown men – “rowdy ranch hands,” no less!

Naturally, that brings concerns about Abigail’s future at ‘Prospect,’ but she decides to view it as a different kind of opportunity. It may not be what Abigail expected, but she hopes to make the best of it and help these men learn like only she can.

It turns out Abigail’s living situation leaves a bit to be desired as well, so that brings another chance for some laughs. Going from Boston to ‘Prospect’ is sure to be a major adjustment. There’s no guarantee this pilot will get picked up and score a full season, but it certainly could. It sounds like an intriguing concept, and King has the talent to make it work.

Some Y&R fans may know that King played Clementine on CBS’ Life in Pieces for four seasons. She started out as a recurring player in season one and was bumped up to a series regular in season two. Now King’s scored the lead role in this pilot, so she could be making great strides in her primetime career if it all pans out.

What happens if ‘Prospect’ indeed moves forward? What will that mean for King’s future at The Young and the Restless? Summer Newman would likely be written out or recast.

We’d say the show would prefer the former just in case King might want to return down the road. Recasting can be hit or miss, so it’s best not to risk it unless it’s necessary. They can always throw other characters in the mix in the meantime.

Of course, it’s too early to say if Summer Newman and Hunter King will leave Y&R or not, but this is definitely something to keep an eye on. As for what’s next in Genoa City, The Young and the Restless spoilers say some hot drama’s brewing.