BY Heather Hughes on February 11, 2020 | Comments: one comment
Related : Soap Opera, Spoiler, Television, The Young and the Restless 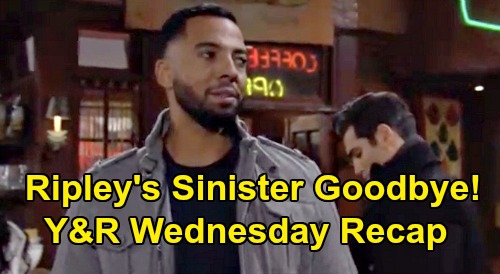 Billy will think this calls for a celebration, so Amanda will suggest she might be game for that. She’ll wonder what Billy has in mind, but he’ll just want Amanda to trust him. On the roof, Amanda will join Billy as they sit on the edge of the building. She’ll confess that she feels alive before talk turns to Billy’s kids. He’ll admit they were informed of his split from Victoria Newman (Amelia Heinle) earlier.

Billy will insist that he couldn’t live under all the expectations. He’ll think Amanda should join him in making a declaration of freedom. It’ll take some convincing, but Amanda will eventually agree to scream with him. Afterward, Amanda will insist she has to go. When Billy asks if she’s OK, Amanda will admit he helped her find her voice. Now Amanda’s ready to roar in a whole new way.

At Lola Abbott’s (Sasha Calle) place, Rey Rosales (Jordi Vilasuso) will find his sister taping up some boxes. Lola will open up about all the difficult emotions she’s dealing with, but Rey will promise that things will get easier. When Lola says sh might go visit Celeste Rosales (Eva LaRue) in Miami, Rey will ask if she really thinks that’s going to be less stressful. He’ll earn a laugh and a “probably not” from Lola.

However, Lola will still think she could really use some Mom time right now. She’ll ask if Rey wants to come along, but he’ll have too much going on. Lola will wonder if everything’s all right, so Rey will suggest there’s nothing to worry about.

At Crimson Lights, Summer Newman (Hunter King) will be sitting with Kyle Abbott (Michael Mealor) when Phyllis Summers (Michelle Stafford) calls. Phyllis will grill her daughter about where she slept last night. She’ll hope Summer isn’t already back together with Kyle, but Summer will insist she knows what she’s doing as she locks eyes with him.

Phyllis will consider cancelling her Vegas trip, but Summer will think her mom should go. She’ll wonder why Phyllis is headed back to Vegas, so Phyllis will contend that she’s feeling lucky. Once Summer hangs up, Kyle will be apologetic for taking so long to see what was right in front of him. Summer will joke that Kyle is a little dense before he kisses her hand – right as Nick Newman (Joshua Morrow) appears.

As Kyle’s leaving, he’ll bump into Rey. Kyle will assume Rey has a lot to get off his chest, so he’ll urge the detective to go ahead and say what he needs to say. Rey will rant about everything Kyle put his sister through. He’ll call Kyle a “selfish, manipulative, entitled dirtbag” before ordering Kyle to stay out of his way.

Back with Nick, he’ll join Summer at her table to discuss the “Skyle” reunion. Nick will point out that Lola and Kyle literally just broke up. “It’s been like a day.” Nick will add that Kyle’s still married, but Summer will defend their decision to get back together. She’ll make it clear that she’s not budging on this, so Nick will make her promise to be careful with her heart.

Meanwhile, Kyle will drop the apartment and see that Lola’s been packing. He’ll comment on how final it all seems – and Lola will think that’s because it is final. She’ll just want to get the divorce over with and will point out that on paper, it’s like they never happened. Kyle will counter that they did happen, but Lola will wonder if any of it was real. Kyle will insist it was real; it just wasn’t forever.

Once Kyle’s gone, Lola will break down in tears over warm “Kola” memories. At the Grand Phoenix again, Phyllis will cross paths with Billy. She’ll notice a familiar glint in his eye and will wonder what kind of chaos Billy’s thinking of stirring up. Billy will argue that he’s enjoying life, but Phyllis will bring up the past and note that she’s seen Billy at his lowest. Of course, Billy will think he’s at his peak right now.

Next, The Young and the Restless spoilers say Nick will approach Phyllis and offer a warning. He won’t think it’s a good idea for Phyllis to follow Adam Newman (Mark Grossman) and Chance Chancellor (Donny Boaz) to Vegas, but Phyllis will maintain that she’s a gambler. Nick will think Phyllis is a gambler who’s going to lose…big. Phyllis will assure Nick that she has no intention of getting burned, but Nick will clearly have his doubts about that.

At Jabot, Kyle will offer Summer updates on his run-in with Rey. He’ll recap that Rey called him selfish and manipulative before admitting maybe he is. Kyle will be sorry about causing pain for all parties involved, but Summer will think back on all the years that led them here. She’ll suggest they weren’t ready before, but this is their time.

Back at the coffeehouse, Rey will bring Ripley in for a meeting with Amanda. After they sit, Amanda will insist she’s not the woman she used to be. She’s wiser, smarter and better. Ripley will take credit for that, but Amanda will counter that it’s in spite of him. She’ll explain that Ripley won’t be charged, but the paperwork’s still there and waiting.

Amanda will want Ripley to leave town and accept that she has all the power. She’ll warn that Ripley’s life will be over if he ever comes around again. After Ripley’s given a one-way ticket back to Madison, Rey will insist Amanda just did him a huge favor. Ripley will mutter that Amanda isn’t as strong as she thinks she is.