The Young and the Restless Spoilers: Theo Poses as Baby Daddy for Pregnant Lola – Robs Kyle of Child With Secret Pact?

BY Heather Hughes on February 11, 2020 | Comments: one comment
Related : Soap Opera, Spoiler, Television, The Young and the Restless 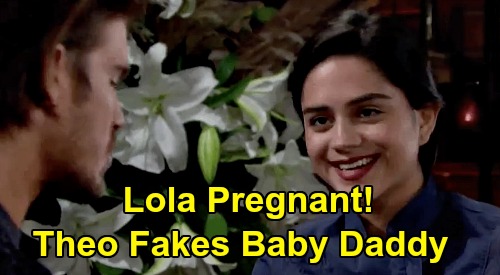 The Young and the Restless (Y&R) spoilers tease that Lola Abbott (Sasha Calle) could have a problem on her hands soon. Of course, most soapy problems come with an equally soapy solution! Could Lola be pregnant with Kyle Abbott’s (Michael Mealor) baby? If so, what’s she going to do about it?

The easy route would be just telling Kyle the truth and co-parenting their potential little one. However, the easy route isn’t the traditional one on a daytime drama. Y&R would surely want to make things a bit more complicated than that.

Lola’s normally the kind of gal who tries to do the right thing, but where has that gotten her? She’s on the verge of a divorce after less than six months of marriage to a man who’s hung up on his ex. Kyle slept with Summer Newman (Hunter King) the very night he called it quits with Lola!

If Kyle couldn’t invest in their marriage, how can Lola trust him to invest in their possible child? Not to mention it’d mean their kid would potentially have Summer for a stepmom one day. Having a permanent link to Summer or even Kyle for that matter probably isn’t very appealing to Lola right now.

If Lola’s pregnant, is there a chance she’ll keep it a secret and consider selling a paternity lie? Lola has admitted that Theo Vanderway (Tyler Johnson) knows her like Summer knows Kyle. She’s found a meaningful connection with Theo, who shares the same background and understands what it’s like to rise above challenges.

Theo doesn’t come from money, so he gets who Lola is and doesn’t have Kyle’s sense of entitlement in Lola’s eyes. If Lola confides a pregnancy secret in Theo, he might convince her that he should pose as the “baby daddy.” Lola might have her doubts about Theo being ready for fatherhood, but he could counter that Kyle isn’t ready either.

Besides, Lola wants to move on with her life and let “Skyle” have their own fresh start. It’s reasonable to think Lola might keep quiet and justify it by suggesting it’d work out best for everyone.

If Summer found out and kept quiet as well, Kyle probably wouldn’t be too happy about that! This could lead to some “Skyle” drama and keep this Young and the Restless story going strong.

Do you think Lola might be pregnant? Whether Theo sleeps with Lola or not, could he convince Lola to let him claim the baby as his own? Even if they have to fudge Lola’s due date a bit, this hot plot could certainly still happen.