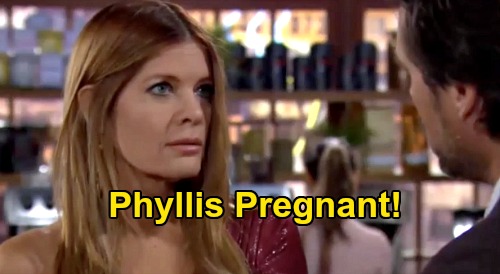 The Young and the Restless spoilers tease that Phyllis Summers (Michelle Stafford) and Nick Newman (Joshua Morrow) could be in for a stunning surprise. As Y&R viewers know, Nick and Phyllis have been enjoying several hot hookups lately, and they recently decided to give their relationship another try. That has led to considerable angst for Summer Newman (Hunter King) over the past few episodes.

Well, one wonders whether all these steamy love scenes between Phyllis and Nick have been prominent on the show for a reason. Could we possibly be looking at a situation where Phyllis winds up with a very unexpected pregnancy out of her newfound relationship with Nick?

Getting pregnant probably isn’t something that’s on Phyllis’ radar at this point in her life, but it’s always possible that it could happen. If Phyllis were to discover that she was pregnant, it would surely have serious ramifications for various characters on the show.

For one, Summer would probably be horrified. Summer has been completely against her parents reuniting, on the grounds that it ALWAYS ends in complete disaster. Summer just wants her parents to grow up and realize that they just aren’t meant to be together for the long haul.

But if a pregnancy were to arise for Phyllis and Nick, then Summer would have something new to worry about – the effect of her parents’ tumultuous relationship on yet another child. And Summer’s not the only one who would have an exaggerated reaction to another “Phick” pregnancy. One can only imagine what Nikki Newman (Melody Thomas Scott) would say!

Nikki was sufficiently horrified when she found out that Nick and Phyllis were seeing each other again, and Nikki would probably quickly realize that a new baby would tie the couple together again for the long-haul…something the Nikki would absolutely not want. And one can readily envision what Victor Newman (Eric Braeden) would have to say to Nick over getting Phyllis pregnant again!

Of course, Victor and Nick have been getting along quite well recently, with Victor actually handing over the Interim CEO spot to Nick for a short time. It has really looked like Victor and Nick’s period of animosity is behind them, but that could all be off if Victor were to find out that Phyllis was pregnant again. Victor doesn’t keep his feelings to himself as a general rule, and Nick would surely get an earful.

We’ll see what happens here, but a Phyllis pregnancy would certainly shake things up among the Newmans, and it would give Phyllis and Nick a whole new set of issues to deal with! It could really result in some high drama if the pregnancy turned out to be high-risk and the Newmans had to be nice to Phyllis to avoid causing her stress!

Do you think there’s a chance Phyllis will wind up pregnant? Stay tuned to the Young and the Restless and remember that CDL is your place for all the hot Y&R spoilers and news.