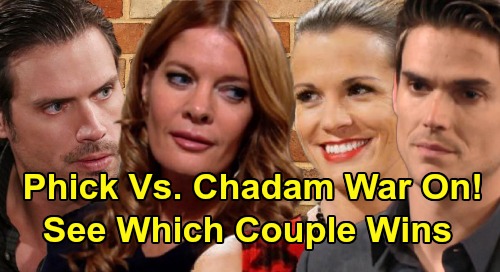 The Young and the Restless (Y&R) spoilers tease that Phyllis Summers (Michelle Stafford) may have a new main rival. For months, Abby Newman (Melissa Ordway) as been Phyllis’ primary nemesis, but Phyllis has certainly sparred with Chelsea Lawson (Melissa Claire Egan) as well. Due to the brewing Newman war, now Chelsea seems poised to slide into that top spot.

Adam pushed Phyllis too far and has been on her bad side ever since. Chelsea has also clashed with Phyllis due to Grand Phoenix issues, but it’s Nick Newman (Joshua Morrow) who’s become a source of contention lately. There was some definite tension after the ice storm. Phyllis was eager to gloat about her night with Nick, which Chelsea didn’t appreciate.

Of course, Chelsea doesn’t want Nick back and isn’t too happy with him right now either. Nick doesn’t trust Adam – and he has plenty of good reasons why. Even so, Chelsea doesn’t like all of Adam’s naysayers. She also doesn’t approve of the way Nick swooped in and stole the CEO spot from Adam with Victor Newman’s (Eric Braeden) approval.

If Adam’s able to swoop in and steal it back through blackmail, that could stir up more conflict. Now that Nick and Phyllis are set to move forward in a relationship, they’ll be a package deal. Adam and Chelsea are the same way. Chelsea’s made it clear that she’ll support Adam no matter what, so she’s in this for the long haul – no matter how ugly things get.

In other words, The Young and the Restless could be gearing up for a major powercouple battle. Y&R could deliver the ultimate Phyllis and Nick vs. Chelsea and Adam showdown! It’d be fun to watch these duos fight for what they want and resort to dirty tactics in the process.

Although Victor will strike a serious blow to Adam following his murder proof, you can’t keep Adam down for long. Adam will inevitably fire back at Victor, but Nick shouldn’t be spared in all of this. Phyllis is a meddler to the core, so there’s no way she’ll butt out. When you throw in loyal Chelsea, there’ll be a lot of vicious, vengeful key players. As other Y&R news emerges, we’ll deliver more updates.