The Young and the Restless Spoilers: Y&R Airing Classic Episodes To Replace New Ones – Shortage Due to Coronavirus Crisis 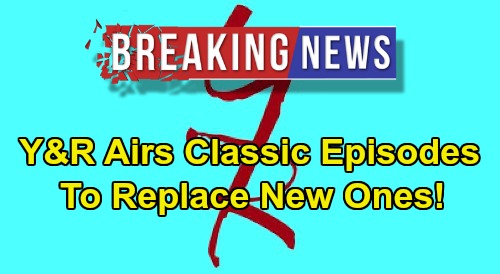 Y&R obviously wants to keep airing new shows for as long as possible, but they’ll burn through them quickly if they air them every day. They need a strategy to make them last and keep delivering new episodes each week for as long as possible. Fortunately, The Young and the Restless has settled on an idea that many fans will approve of.

Several cast and crew members have confirmed that Y&R will be throwing some classic episodes in the mix. In other words, you’ll see some new episodes each week, but there’ll be some special shows of the past in between. This obviously presents an opportunity to relive some wonderful memories and see some unforgettable moments.

There’ll surely be a few weddings as part of this throwback plan. Doug Davidson (Paul Williams) tweeted that Paul and Christine Williams’ (Lauralee Bell) honeymoon episode was scheduled – at least that’s what he heard! The Young and the Restless could also air some episodes with explosive revelations and anything else that might’ve been memorable over the years.

If you’re a longtime fan of Y&R, it sounds like you might enjoy taking a walk down memory lane. If you’re a newer viewer, it’s the perfect chance to see some of what you missed! The Young and the Restless is making lemonade out of lemons here. The extended production suspension can’t be helped, but they can at least stretch things out and make those new episodes last a little longer.

As a bonus, Y&R can deliver some fantastic blasts from the past! The Young and the Restless spoilers say there’s much more drama ahead, but it never hurts to look back and see how far these characters have come. Once more news emerges, we’ll be sure to give you all the latest updates.

What do you think about Y&R’s plan to air classic episodes mixed in with new ones? What memorable episodes would you like to see? CDL will have other exciting Young and the Restless spoilers, updates and news, so don’t forget to check back regularly.