The Young and the Restless Spoilers: Jason Thompson Claps Back at Rude Fan – Y&R Star Responds to ‘Boring’ Billy Criticism 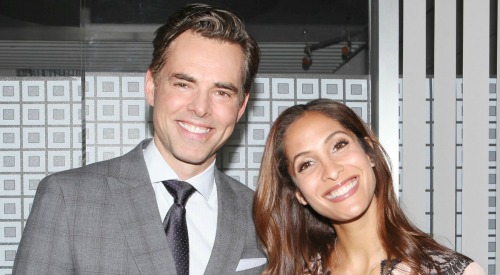 The Young and the Restless (Y&R) spoilers reveal that one CBS soap star recently clapped back at a fan on social media. The trouble started when Y&R’s Twitter account tweeted out a picture of Jason Thompson (Billy Abbott) and Christel Khalil (Lily Winters). The caption said, “Who loves seeing Billy and Lily working together? We know we do!”

The replies were a mixed bag since some viewers are on board with the idea and others just aren’t feeling it. This is certainly a matter of opinion – and everyone’s entitled to his or her own!

Of course, it’s good Twitter etiquette to untag the actors if you’re going to tweet criticism. There’s really no need to tell them you’re not enjoying something, especially if it’s related to the show’s writing.

Nevertheless, some fans choose to ignore that unspoken Twitter rule and tag the actors in rude tweets anyway. One Young and the Restless viewer piped up, “Glad Lily is back. She was missed.

As to Billy, he needs to find a life. His character really got boring.” Since this “boring” comment showed up in Thompson’s Twitter mentions, he took the opportunity to respond.

“Cool. I’ll try and be more interesting for you. Lily can help,” Thompson tweeted. Naturally, Thompson was being a bit sarcastic here. Since Thompson doesn’t write what Billy says and does, there’s not much he can do to make Billy more interesting.

Thompson can only memorize what’s on the page and give the best performance possible. It’s clear that Thompson is an impressive actor, so it was rather pointless to send him criticism about his character being boring.

That said, it’s tough to argue that fan was wrong! Billy has indeed become a tad dull in recent months, especially throughout that storyline with Amanda Sinclair (Mishael Morgan) – which ended up going nowhere at all.

On the bright side, Billy and Lily at least have a goal besides sitting at a dive bar chatting. They’re trying to build up Chancellor Media, and Traci Abbott (Beth Maitland) may be on the verge of joining their team. Chancellor Media will add some other surprising employees in the coming weeks, so there’ll be chances for more drama.

Lily and Billy also have some nice chemistry depending on who you ask. There’s the potential for a hot romance if all goes well, so maybe Billy can rise out of the dull pit he’s been in for a while now. It’s a writing issue and not an actor issue, but Thompson needs to be able to show off his talent!

Who loves seeing Billy and Lily working together? We know we do! 🙌 #YR pic.twitter.com/9aLiE0aAAu