BY hellodrdavis on January 27, 2020 | Comments: one comment
Related : Soap Opera, Spoiler, Television, The Young and the Restless 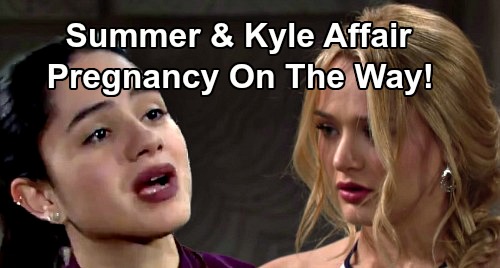 The Young and the Restless spoilers tease that Kyle Abbott (Michael Mealor) could really end up in a bind. As Y&R viewers know, he and Summer Newman (Hunter King) are away on a business trip in San Francisco, and that trip has happened to come at a time when Kyle and Lola Abbott’s (Sasha Calle) relationship is at a weak point.

In fact, Kyle even left for the trip without telling Lola that he loved her, which seemed like a really bad sign. It seems like trouble has been brewing in Kyle and Lola’s relationship for a while now, ever since Theo Vanderway (Tyler Johnson) started coming between them.

Kyle just can’t stand it that Theo has struck up a friendship with Lola. He feels that Theo is playing Lola, and that Lola is encouraging it. But that’s not all of the trouble that “Kola” have been facing.

Over time, there have been many little hints that things aren’t peachy keen with the couple. When Kyle and Lola had their pregnancy scare a while back, it was pretty clear that the whole thing really overwhelmed Kyle and that he was a little too relieved when it turned out to be a false alarm.

And then he and Lola have just seemed like they’ve been disconnected lately, while Kyle and Summer always seem to be in sync. Well, according to Y&R spoilers, Kyle and Summer will end having a wildly successful business trip to San Francisco.

The whole trip was designed for Kyle to make s big acquisition for Jabot so it’s pretty important, and after the deal is closed, Kyle and Summer will be feeling celebratory. One thing will lead to another, and the two will kiss passionately.

Kyle will then put a stop to it, out of respect for his marriage to Lola, but a line will definitely have been crossed.

From there, the Young and the Restless spoilers say that Kyle will head back home and ultimately spill the beans to Lola, who won’t be happy, to say the least. But now that Kyle and Summer have crossed that line, one wonders whether they’ll ultimately fall into having a full-blown affair.

It seems pretty likely, especially if Lola and Kyle’s relationship blows up after the kiss reveal and Kyle finds himself in a vulnerable state.

It seems pretty clear that Summer still really wants Kyle, and that Kyle still feels something for Summer, too.

They seem to have been inching toward something happening between them for some time, and now Y&R buzz is that the two will soon end up sleeping together. And if that happens, it’s hard to imagine Lola ever taking Kyle back.

Plus, if and when Kyle and Summer do sleep together, there’s a very real possibility that Summer could wind up pregnant. It seems like a 2020 Abbott-Newman baby would make for some great storytelling and some major turmoil for Lola.

One can only imagine how Rey Rosales (Jordi Vilasuso) would come down on Kyle if he were to wind up with a baby on the way with Summer, rather than Lola! Yikes.

We’ll see what happens here, but things seem to be pointing in the direction of a full-blown Kyle/Summer affair. Do you think that Kyle and Summer will go there? Stay tuned to the CBS soap and don’t forget to check CDL often for the latest Young and the Restless spoilers, updates, and news.