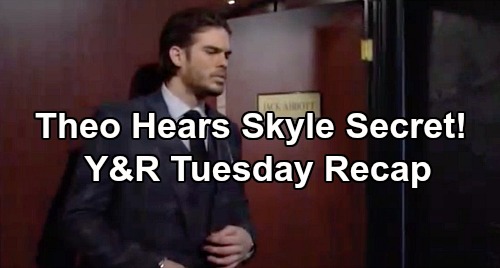 The Young and the Restless (Y&R) spoilers recap for Tuesday, January 28, teases that Mariah Copeland (Camryn Grimes) will pay Sharon Newman (Sharon Case) a visit. At the cottage, Mariah will find her mom looking through cancer brochures. She’ll know Sharon has a lot on her plate, so she’ll offer to hold down the fort at Crimson Lights.

After Sharon turns down the offer, she’ll think she should just close up for a few weeks and do some renovations. Meanwhile, Nick Newman (Joshua Morrow) will stop by to see Nikki Newman (Melody Thomas Scott). When Nikki asks about all the time Nick’s been spending at Sharon’s place, he’ll suggest they’ve been dealing with some Faith Newman (Alyvia Alyn Lind) stuff.

Talk will turn to the Newman Enterprises anniversary party and all the planning. Nikki will fill Nick in on her trip to London, which involves preparing for the gala. She’ll mention meeting with an artist and hopefully scoring a dress in Paris.

Nick will suggest he can pitch in on planning the event while Nikki’s away. Y&R spoilers say Nikki will once again take a Sharon-related jab. She’ll think this will give Nick less time to spend with his ex, but he’ll point out Sharon’s with Rey Rosales (Jordi Vilasuso) now. Nick will push Nikki to back off and leave Sharon alone.

Afterward, Nick will drop by Sharon’s place and note that he did some research on other specialists. Sharon will thank Nick for trying to give her options, but she’ll promise she’s happy with her medical team. Once Nick’s gone, Sharon will be frustrated over all the attention. She’ll explain her view to Mariah, who’ll drop some hints to Nick at Society later.

Mariah will point out that Sharon doesn’t want to be looked as a victim. She’ll feel like they have to respect boundaries and give Sharon the space she needs. Nick will realize Sharon must’ve said something, so he’ll be grateful that Mariah’s setting him straight on this. They’ll reaffirm they’re on “Team Sharon” and that Mariah will keep Nick in line.

Other Young and the Restless spoilers say Abby Newman (Melissa Ordway) will clash with Phyllis Summers (Michelle Stafford). At the Grand Phoenix, they’ll spar over Phyllis’ upcoming date with “Chance” Chancellor (Donny Boaz). Once Phyllis saunters off, Abby will turn her attention to Chance. She’ll make it clear that she doesn’t feel threatened by Phyllis, so it’s fine for him to go on this date.

Phyllis will head downstairs later in a robe and with her hair in a towel. She’ll gripe about the water not working, so Abby will urge her to go back up to her suite and wait. Phyllis will suggest that Chance could come up as well and check out the plumbing, but he’ll decline.

Next, Abby will bring Phyllis up to speed on the fixed water and make a prediction. She’ll think Chance is going to see what a disaster area Phyllis is soon enough. After Phyllis overhears Chance on a phone call, she’ll be curious about his missing target. Chance will think they should discuss something besides work. Phyllis will go along with the subject change since there are far more interesting things they could be doing.

Nearby, Abby will glare at Chance and Phyllis while they banter. She’ll definitely seem worried that Chance’s interest in Phyllis is growing. At Jabot, Theo Vanderway (Tyler Johnson) will try to pry trip details out of Summer Newman (Hunter King). She won’t take the bait, but Theo will keep at it anyway.

Summer will turn the tables and wonder what Theo was doing while she was in San Francisco with Kyle Abbott (Michael Mealor). She’ll assume he was trying to sell the idea of how misunderstood he is to Lola Abbott (Sasha Calle). Theo will protest that he advised Lola to go easy on Summer. He’ll mention that Lola is an authentic person and his only friend.

Back at Society, Kyle will give Lola updates on the business deal he locked down. Lola will ask why he’s not bringing up Summer, so Kyle will admit she was crucial on this trip. They’ll agree to talk through the issues in their marriage, but that conversation will have to wait. Lola will get a call about Celeste Rosales (Eva LaRue) breaking her ankle in a car accident, so Kyle will suggest they can talk later.

Next, Kyle will speak with Summer at Jabot. He’ll confess that something came up, so he hasn’t cleared the air with Lola yet. Summer will wonder if Kyle’s going to mention the kiss, but he won’t see the point. Kyle will just want to move forward, and Summer will agree that’s the right call.

As Theo arrives and starts eavesdropping, Summer will insist they should put what happened in San Francisco in the vault. She’ll argue that they should lose the combination and throw away the key. Summer won’t believe they should think about it ever again.