BY Heather Hughes on January 27, 2020 | Comments: one comment
Related : Soap Opera, Spoiler, Television, The Young and the Restless 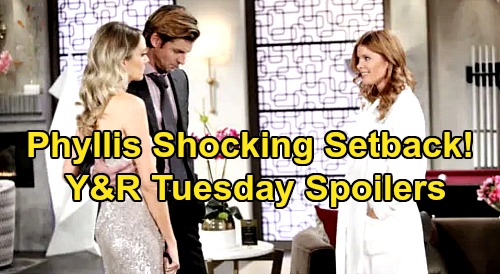 The Young and the Restless (Y&R) spoilers for Tuesday, January 28, tease that Phyllis Summers (Michelle Stafford) will face a tough blow. Y&R fans know Phyllis is quite interested in “Chance” Chancellor (Donny Boaz). She seems most curious about what went down in Vegas, but there’s more to it than that.

Phyllis also relishes any opportunity to push Abby Newman’s (Melissa Ordway) buttons, so that’s another great reason to go after Chance. Besides, Chance is handsome and confident. He seems like Phyllis’ type, so there’s surely some genuine attraction underneath all the games. That goes for Chance, too!

However, Chance also knows Phyllis has a few tricks up her sleeve. He’s undoubtedly got a few of those, too. That could be why Phyllis faces this difficult setback in Tuesday’s Young and the Restless episode. The date she was hoping for with Chance may not be what she expects.

No matter what shockers unfold, Chance will ultimately turn his attention back to Abby. There’ll be some sparks flying between them later this week. In the meantime, Nick Newman (Joshua Morrow) will stand his ground. He’ll feel like he has to be authoritative on Tuesday, so it’ll be interesting to see what that’s all about.

It’s possible it’ll involve some tough love for Sharon Newman (Sharon Case). Nick may feel like Sharon’s not relying on those in her secret circle. He may insist that Sharon has to let her loved ones take care of her. They’ve all declared themselves on “Team Sharon,” so it’s important for Sharon to lean on them when she needs them.

Then again, this could involve Adam Newman (Mark Grossman) since Nick’s always eager to clash with his brother. It could even involve Victor Newman (Eric Braeden), who tends to spar with Nick from time to time. Nick may have to set one of the Newmans straight on something and hope his point gets across.