BY hellodrdavis on January 26, 2020 | Comments: 2 comments
Related : Soap Opera, Spoiler, Television, The Young and the Restless 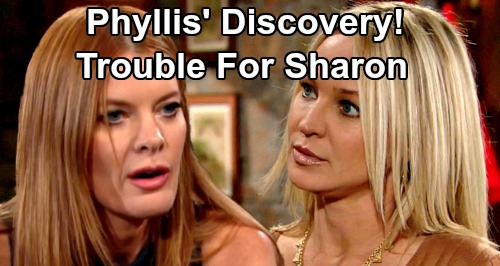 The Young and the Restless spoilers tease that Sharon Newman (Sharon Case) will do her best to adjust to her new normal. As Y&R viewers know, she was recently diagnosed with Stage 2 breast cancer, and it’s been tough for her to wrap her mind around that.

Of course, a cancer diagnosis is something that nobody ever wants to hear about themselves or a loved one, and Sharon will soon have to deal with things that she never imagined that she’d have to deal with.

According to Y&R spoilers, Sharon will soon have a mound of paperwork and medical records to contend with.

It’s tough enough coming to grips with the diagnosis itself and jumping right into treatment, but Sharon will also have to face what could be some complicated insurance issues, medical red tape, and seemingly endless medical appointments.

In fact, it looks like Mariah Copeland (Camryn Grimes) will step in to help her mom deal with all of the paperwork and additional tasks that she’ll now have.

They’ll be able to spend some good mother/daughter time together, and it will allow Mariah to help care for her mom in her time of need, which will be great. But it seems that Mariah might try to overstep a bit in the days to come.

According to the Young and the Restless spoilers, Mariah will notice that Sharon seems a little frazzled and overwhelmed by what she’s going through, and he’ll offer to take over the day-to-day business of Crimson Lights for her mom.

It will be a sweet gesture and will of course be made with the best of intentions, plus it will come at a time when Mariah needs something to do, since Tessa Porter (Cait Fairbanks) is out of town on tour with Tanner Watts (Chase Coleman).

But Y&R spoilers say that Sharon will gently turn Mariah down. She’ll feel like she needs to keep things in her life as normal as possible, given what’s going on with her health.

It might be hard for Mariah to grasp at first, but Sharon will need to keep a much of her day-to-day life the same as it’s always been, so that she feels “normal” during her cancer treatment. She’ll just want something to be stable in her life.

Of course, there’s another issue that Sharon will soon have to face, which is that people around town are soon going to sense that something is going on with her health.

Soon, it will be difficult for Sharon to hide what’s going on, and she’ll have to deal with other people’s reactions. In fact, Y&R spoilers say that Phyllis Summers (Michelle Stafford) will soon start to get suspicious when she notices a bandage on Sharon.

It looks like Sharon will deflect and come up with some other excuse for it, but it Phyllis will remain curious – and we all know that when Phyllis gets curious about something, she’s relentless.

One wonders if Sharon will have to disclose her battle with cancer before she’s ready. That would be truly unfortunate, but if Phyllis persists then she might be forced to come forward before she’s ready, and that could lead to some resentment. Let’s hope that Sharon stays in control of how and when the information gets out – for her sake.

At any rate, Sharon will have a lot to go through in the days to come, as she starts chemotherapy to shrink the tumor and then gears up for her eventual surgery. But she should get plenty of support along the way. Stay tuned to the CBS soap and don’t forget to check CDL often for the latest Young and the Restless spoilers, updates, and news.