BY Heather Hughes on January 26, 2020 | Comments: one comment
Related : Soap Opera, Spoiler, Television, The Young and the Restless 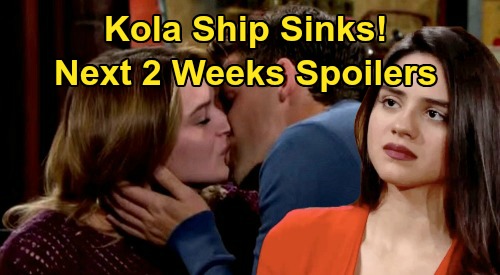 The Young and the Restless (Y&R) spoilers for the next two weeks tease that some twists and turns are looming. Keep in mind that the impeachment trial could throw off airdates or lead to interruptions. It’s something fans should be aware of as we gear up for more news coverage.

During the week of January 27-31, Victoria Newman (Amelia Heinle) will be exasperated. She won’t understand why Billy Abbott (Jason Thompson) refuses to accept he’s got problems. Victoria will learn Billy went back to the dive bar instead of therapy. She’ll spar with Billy, who’ll ultimately dump her and head out with his packed bag.

Afterward, Victoria will lean on Nikki Newman (Melody Thomas Scott) for support. She’ll bring Nikki up to speed on her split and how ugly it got. Victoria will insist Billy’s gone and isn’t coming back.

Meanwhile, Billy will end up a bit bloodied after an attack. He’ll join Amanda Sinclair (Mishael Morgan) in a suite at the Grand Phoenix, which could complicate their already complicated relationship. Despite Amanda’s decision to cut things off prior to Billy’s breakup, she may have another change of heart.

Other Young and the Restless spoilers say Lola Abbott (Sasha Calle) will get some infuriating updates. After Kyle Abbott (Michael Mealor) confesses that he kissed Summer Newman (Hunter King) on their business trip, Lola will hit the roof. “Kola’s” marriage will take its hardest hit yet.

During the week of February 3-7, Amanda’s past will come back to haunt her. That could involve the first signs of Ripley Turner’s (Christian Keyes) imminent arrival. Amanda’s abusive, controlling ex may send Amanda a clear message about what’s in store for her.

Over with Billy again, he’ll face Victor Newman’s (Eric Braeden) fury. Billy will get a stern warning from Victor, so he’d better watch his step! Victor will later teach someone a lesson, which could mean Billy will face more backlash. It’s safe to say Victor won’t be pleased about Victoria’s heartbreak.

Next, Abby Newman (Melissa Ordway) and “Chance” Chancellor (Donny Boaz) will have another date night. If all goes well, they should add some heat to their romance. Phyllis Summers (Michelle Stafford) managed to sabotage Chance and Abby’s recent evening together, but it looks like this one will pan out. Abby may enjoy some fun in the bedroom with Chance soon enough.

Back with Amanda, Y&R spoilers say some troubling news is coming up. Perhaps Amanda will realize Ripley’s tracker has been disabled – or that he’s in town. As for Kyle and Lola, they still won’t be able to get on the same page. It sounds like the “Kola” ship will just keep right on sinking.

Finally, Adam Newman (Mark Grossman) will focus on some unfinished business. That may involve the woman Adam’s paying off in Vegas, who could become a bigger issue if he lets her. Adam will try to handle his latest obstacle before it gets out of hand.