BY Heather Hughes on January 25, 2020 | Comments: one comment
Related : Soap Opera, Spoiler, Television, The Young and the Restless 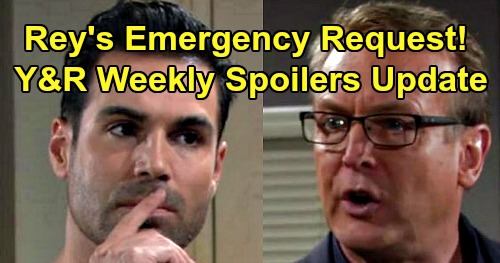 The Young and the Restless (Y&R) spoilers update for the week of January 27 to January 31 tease that some bombshells are brewing in Genoa City. Before we dive in, we should mention that impeachment trial coverage will continue. Just keep that in mind in case episodes get pushed back or interrupted. If it’s the latter, you can always catch up online.

Now let’s get to some hot drama. First, we should talk about some crossed lines. Theo Vanderway (Tyler Johnson) will do his best to pull Lola Abbott (Sasha Calle) closer and turn her against Kyle Abbott (Michael Mealor). He’ll get some help with that thanks to Kyle’s blunder in San Francisco.

The Young and the Restless spoilers say Summer Newman (Hunter King) will kiss Kyle, so he’ll kiss back. However, Kyle will eventually realize this isn’t what he wants. He’ll assure Summer that he intends to work things out with Lola, although he values Summer’s friendship.

Summer will be mortified as they eventually head back to GC. That’s where Kyle will have a confession pried out of him. Lola will explode when she gets updates on that kiss, but Kyle will insist it meant nothing. He’ll try to convince Lola that she’s the only woman for him, but Lola won’t be so sure she believes that.

Billy will prove that when he later returns to Victoria and admits he’s not going back to therapy. Billy will know this is going to lead to a fight and a breakup.

Nevertheless, Billy will feel like it’s for the best. Despite Victoria’s plea for him to keep trying, Billy won’t be willing to do that. He’s sick of everything requiring so much effort.

Billy’s ready for easy freedom, so he’ll gather up some of his belongings and stuff them in a suitcase. He’ll walk out on Victoria – and she’ll believe he’s never coming back.

Billy won’t feel like he can connect with anyone in Genoa City. It’s become a place where he feels judged and looked down upon. Before Billy can seek a fresh start, he’ll run into some trouble.

Billy will face a beating from someone and will seemingly wind up in Amanda’s hotel suite. She’ll learn Billy ended things with Victoria and intends to move on with his life.

The Young and the Restless spoilers say Amanda will show sympathy for Billy, so maybe they can get their friendship back on track. They might even become more than pals before you know it.

Then again, some Nick Newman (Joshua Morrow) drama is coming up in the week ahead. He’ll get tough with someone, so that could set up Nikki and Victor’s issues.

Next, Mariah Copeland (Camryn Grimes) will struggle with some issues of her own. Tessa Porter (Cait Fairbanks) is on tour and Sharon Newman (Sharon Case) has breast cancer, which Mariah hasn’t confided in Tessa. The stress, sorrow and solitude will begin to take a toll on Mariah this week.

As for Tessa, she’ll continue to collaborate on music with Tanner Watts (Chase Coleman). Y&R fans will catch up with them on Tanner’s jet, but drama may go down eventually.

It feels like Tanner might still have a thing for Tessa, but she’s committed to Mariah and may have to remind him. If the show sticks to Tessa’s declaration of being gay, she should have no interest in Tanner for multiple reasons.

There’ll also be some ex awkwardness between Nick and Chelsea Lawson (Melissa Claire Egan), but they’ll try to power through it. Finally, Rey Rosales (Jordi Vilasuso) will face an emergency and will seek help from Paul Williams (Doug Davidson). Will that involve an especially tough case or some other sudden crisis?