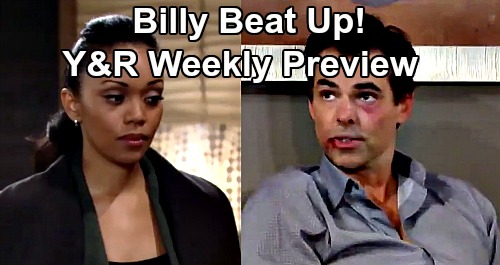 The Young and the Restless (Y&R) spoilers for the week of January 27-31 tease that some stunning moments are coming up. Before we dive in, we should mention that impeachment hearings coverage will continue. It’s possible there’ll be preemptions along the way, so just keep that in mind.

Now let’s talk about all the action happening in the upcoming week. Y&R’s weekly preview video focuses on Billy Abbott (Jason Thompson) and his issues – or lack thereof if you ask him! Billy doesn’t think he’s broken and wants Victoria Newman (Amelia Heinle) to accept him as he is.

Unfortunately, Victoria just can’t get on board with that. She feels like Billy needs help that he’s unwilling to get. The Young and the Restless spoilers say Billy will vent to Amanda Sinclair (Mishael Morgan) again.

He’ll be surprised when she suddenly ends their friendship and refuses to help him cross the line in his marriage.

Billy won’t agree with that decision, but it’ll probably fuel a decision of his own. Later, Billy will feel like Victoria’s holding him back from the freedom he wants. The Young and the Restless spoilers say Billy and Victoria will have a final faceoff in their living room.

After Billy admits all he ever wanted to do was make Victoria happy, she’ll beg Billy to keep trying.

Billy won’t think he can try to be something that he isn’t. He’ll want the chance to explore a life without judgment, so he’ll pack a suitcase and leave Victoria crushed.

Nikki Newman (Melody Thomas Scott) will support her daughter in the aftermath. Victoria will insist that Billy’s gone and isn’t coming back. She’ll believe this is truly the end of the road for “Villy.”

Here’s where things get interesting. Y&R’s promo shows Billy looking pretty banged up as he talks to Amanda. His face has clearly been bloodied in a fight.

Unless this preview video is skipping ahead, it probably won’t be Ripley Turner (Christian Keyes) who attacks. Amanda’s dangerous ex-fiancé isn’t set to debut until February, so who’s behind Billy’s injuries?

It’s possible it’ll be the outcome of a poker game gone wrong. Then again, Victor Newman (Eric Braeden) might show his claws for once and send a little dose of punishment through a henchman. There could even be some random guy that Billy steps up to protect Amanda from. After all, he’s stood up for her before.

Whatever the case, Billy will be banged up and will apparently land on the sofa in Amanda’s suite. He’ll tell Amanda that “it’s just not going to work no matter how hard we try.” Will the end of Billy’s almost marriage change Amanda’s mind about their friendship? Could their relationship become even more?

Billy and Amanda could face some flying sparks since they’ll be in a hotel room together. The Young and the Restless spoilers say they’ll have to decide what’s next!