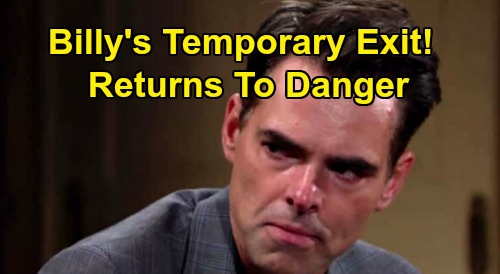 The Young and the Restless (Y&R) spoilers tease that Billy Abbott (Jason Thompson) will meet with Amanda Sinclair (Mishael Morgan) and face a difficult blow. She’ll realize this awkward relationship of theirs isn’t working, so she’ll decide they need to end it. Although they’ve kept things platonic so far, Amanda will just think it’s best if they walk away from this friendship entirely.

After Amanda cuts Billy out of her life, he’ll feel like he’s lost the only person who doesn’t judge him. That’ll be weighing on Billy’s mind as he returns to Victoria Newman (Amelia Heinle) and makes a big speech about his future.

Billy just won’t think he can do this anymore. He’ll contend that he can’t deal with Victoria’s smothering behavior and wants to feel what real freedom is like.

With that in mind, Billy will pack his bags, break up with Victoria and leave town for a while. Victoria will be devastating since she really thought things would be different with Billy this time around.

Their reunion will end in disaster, but Billy will just want to find himself and figure out what he truly wants out of life. Billy will head off on a temporary exit from Genoa City to see if he can nail down exactly what that is, but it sounds like he’ll be back soon.

According to 2020 preview info, The Young and the Restless spoilers say Billy and Amanda will land in a risky situation. They’ll face a brush with danger that forces them to question how they actually feel about each other.

Since that hasn’t happened yet, it means Billy’s Y&R exit will be temporary. It may not last long at all since Ripley Turner (Christian Keyes), Amanda’s abusive ex-fiancé, will make his debut this February. This danger that Billy and Amanda land in will most likely be tied to Ripley.

Billy may end up saving the day and making Amanda realize pushing him away was the wrong call. Whatever the case, there are more Young and the Restless spoilers related to Billy. There’s no need to worry about Thompson leaving the show – at least not at this point in time.

Anything can happen in the future, but some Amanda and Ripley drama awaits for now. We’ll give you updates as other Y&R news comes in. Stay tuned to the CBS soap and don’t forget to check CDL often for the latest Young and the Restless spoilers, updates and news.