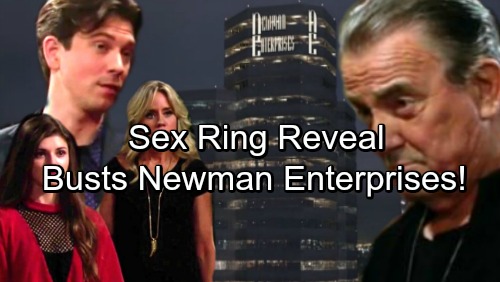 Victor was semi-retired earlier this year. He let Abby take partial control of the CEO’s wheel in so doing, which is proving to be a mistake. The family problems Victor has subsequently caused also shifted his focus from business, which created an opening for Zack to fool Abby into believing that he’s a legitimate business man and a romantic connection.

Actually, the Black Knight has been distracted for the past few years. As hardcore viewers recall, Victor was keeping a close eye on Chloe (Elizabeth Hendrickson) when she was in a mental health facility in California. He decided that tortured soul was well enough to be released, so he bribed Dr. Harris (Ron Melendez) to make that happen.

Chloe was then used to frame Adam (Justin Hartley) for the murder of Constance Bingham (Sally Kellerman). Victor later regretted what he’d done and helped Adam to escape from prison. Chloe wasn’t on board with Victor’s change of heart and decided to kill Adam. That led to her blowing up a hideaway cabin where Adam was waiting for Chelsea (Melissa Claire Egan), Nick (Joshua Morrow) and Connor (Gunner and Ryder Gadbois) to arrive so he could flee with his family.

Nick eventually discovered that his dad was involved with Chloe and therefore, Adam’s apparent death. He outed Victor to Nikki (Melody Thomas Scott) and Vickie (Amelia Heinle). Nikki left Victor, but Vickie has since reconciled with her father.

All of the above caused Victor to fix his ire upon Nick. He’s arguably never been more incensed with his son, or bent on revenge. Faith (Alyvia Alyn Lind) realization of why her dad was kicked out of the Tack House then caused her relationship with Victor to fracture. That sent the Moustache into further frenzy.

Victor is obsessed with punishing Nick, which is clouding his view of business. His foolhardy behavior will prove costly. If Victor would have been on his game all along, Zack may have never been left in the gate.

A public relations nightmare will ensue when it’s revealed that Newman Enterprises has been unwittingly funding a Genoa City-based sex ring. Damage to the company’s bottom line due to an uproar among business partners and customers seems sure to follow.