The Young and the Restless Spoilers: Little Richard Dies Of Cancer – Music Icon’s Appearance On Y&R Was Epic 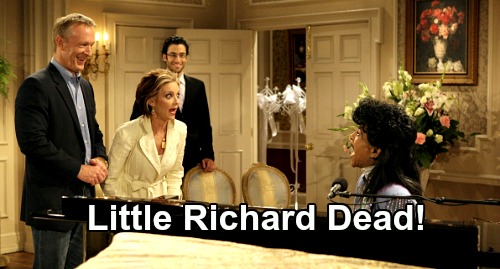 Penniman died of bone cancer at 87. His epic career as a singer and musician dated back to the 1950’s, when rock music first gained widespread popularity. Little Richard burst onto the scene with the song Tutti Frutti and followed with many other hits including Lucille and Good Golly Miss Molly.

A photo of Little Richard at Gloria and Jeffrey’s Vegas wedding was posted on Twitter by Y&R. An included caption reads, “RIP to Little Richard who blessed #YR with his talents in 2008.”

Young And The Restless Spoilers – Glow And Jeffrey Were Very Entertaining

Glow and Jeffrey were in love at the time, but she later discarded the grifter. Chapman’s character debuted in 2005 and hasn’t been seen since 2018, when she last served as Jack Abbott’s (Peter Bergman) administrative assistant at Jabot and surprising romantic companion.

Shackelford’s character debuted in 2006 and was last seen in 2017. He is Chelsea Lawson’s (Melissa Claire Egan) father and Connor Newman’s (Judah Mackey) grandfather.

This particular couple followed in the tradition of other mature light-hearted pairings like Katherine Chancellor (Jeanne Cooper) and Rex Sterling (Quinn Redeker). Comic relief is routinely mixed in with more serious storylines in order to provide balance.

Young And The Restless Spoilers – Little Richard Was An Incredible Showman

Little Richard’s incredibly energetic style put him in a category of his own. Little Richard’s amazing vocals and ever-dynamic piano performances combined to create a legendary career. His place in Y&R’s all-time cast is another impressive part of this show’s storied history.

Young And The Restless Spoilers – Condolences Offered For Great Star

A mention on social media would merely add to Little Richard’s honors if Y&R were showing new episodes. Generally the star’s photo, along with a caption, would have appeared at the end of an upcoming episode.

Thankfully Y&R can at least offer condolences through its digital platform during the production shutdown. CDL is a leading source for everything linked to The Young and the Restless. Check back regularly for Y&R spoilers and news!

RIP to Little Richard who blessed #YR with his talents in 2008. pic.twitter.com/mIEvaseY1V