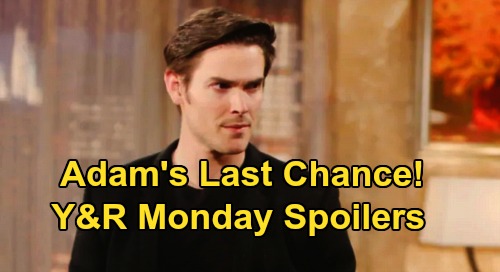 The Young and the Restless (Y&R) spoilers for Monday, April 13, tease that Victoria Newman (Amelia Heinle) will try to poison Alyssa Montalvo (Maria DiDomenico) against Adam Newman (Mark Grossman) and Chelsea Lawson (Melissa Claire Egan). Victoria will insist Alyssa shouldn’t let whatever act Chelsea and Adam are trying to pull fool her, but Alyssa will be in a tight spot.

Although Alyssa’s been frustrated over Adam’s delay in getting her article published, he managed to placate her for the time being. Of course, Victoria will try to rile Alyssa up all over again.

The Young and the Restless spoilers say Victoria will want to join forces with Alyssa. Since Victoria will believe there’s a deeper story to uncover, she’ll think Alyssa could be the key to cracking the true case.

Meanwhile, Victor Newman (Eric Braeden) will have a showdown with Adam at Newman Enterprises. Victor will see that Adam’s making himself right at home in his new office.

They’ll trade barbs and bicker about power before Victor levels a serious threat. Adam will think Victor should just admit defeat and get over it, but Victor will feel like Adam’s the one who’ll pay the price if he doesn’t back down.

The Young and the Restless spoilers say Victor will give Adam one last chance to stop the madness. Adam may think he’s in charge, but his rise to the top is only temporary.

Victor will make that crystal clear and deliver an ultimatum. It sounds like Adam will be given the choice of letting Victoria reclaim the throne or facing whatever consequences Victor dishes out.

Adam will probably remind Victor of the dirt he has on him and argue that there would be consequences all around. Y&R spoilers say Adam will think Victor’s completely backed into a corner.

However, Adam’s underestimating Victor and obviously doesn’t have all the facts. Although Victor will warn there could be no coming back from this battle, Adam will refuse to cave in.

With that in mind, Victor will soon know what he has to do. The Young and the Restless spoilers say Adam will indeed face regrets after his plot blows up in his face.

Whether Victor’s to blame or perhaps Victoria, you can bet Adam will be sorry he went looking for trouble! Y&R fans will be curious to see just how ugly this Newman war gets in the coming weeks.

On a lighter note, Amanda Sinclair (Mishael Morgan) and Nate Hastings (Sean Dominic) will make the quick leap from friends to more. After a lovely date at Society, Nate and Amanda will find themselves leaning in for a close moment. The Young and the Restless spoilers say it’ll lead to a hot kiss, so Nate and Amanda will already be heating things up.

As other Y&R news rolls in, be sure to check back for updates. It sounds like some great stuff’s coming up on Monday, so stay tuned! CDL’s your hotspot for Young and the Restless spoilers, updates and news.