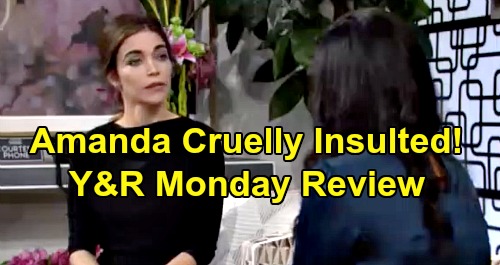 The Young and the Restless spoilers review for Monday, February 3, tease that Nikki Newman (Melody Thomas Scott) will arrive at Newman Enterprises to see Victoria Newman (Amelia Heinle) ahead of her trip to Europe. Nikki will come bearing news about Billy Abbott’s (Jason Thompson) bar fight, and about how Amanda Sinclair (Mishael Morgan) bailed him out. This will upset Victoria, who will learn that Victor Newman (Eric Braeden) has been having Billy followed.

Victoria will surmise that there must be photographs, and she’ll reassure her mom to show her a photo of Billy and Amanda together. She’ll learn from Nikki that Billy is now staying at the Grand Phoenix…the same place where Amanda’s staying. Victoria will be peeved. Meanwhile, Amanda and Billy will meet up at Crimson Lights, and Amanda will relay that he won’t face charges in connection with the bar brawl.

Billy will wonder if he and Amanda are still friends, and he’ll hope that he hasn’t sent her mixed signals. They’ll reestablish that they are friends and that neither of them is looking for anything more than that. From there, Billy will head to Jabot, where he’ll walk in and startle Jack Abbott (Peter Bergman) with his black eye. Jack will demand to know what’s going on, and Billy will tell Jack about his need to express his authentic self.

Jack will hear about Victoria and Billy’s split, and he’ll immediately start worrying that Billy is gambling again. Billy will tell him he’s not gambling in “any serious way,” which will alarm Jack. Billy will refuse to go to a meeting, and Jack will maintain that none of this is going to work out well. Billy will get miffed and sarcastically thank Jack for his show of faith before walking out.

At the Grand Phoenix, Victoria and Amanda will come face to face, at Victoria’s request. They’ll sit in the lobby together, and Victoria will fire questions at Amanda about her relationship with Billy. Amanda will keep her cool and relay that she has no romantic interest in Billy, and that they are simply friends and that she acted as his lawyer. Victoria will call her an enabler and tell a surprised Amanda about Billy’s gambling addiction.

Ultimately, Amanda will state that she is hoping that Victoria and Billy can get back together, but Victoria will say that Billy has made his choice, that the damage is done, and that it’s permanent. She’ll snark that if Amanda has been waiting for an opening, then this is it, but that if she’s smart, she’ll stay far away from Billy.

Meanwhile, on the new episode of Y&R on Monday, February 3, Lola Abbott (Sasha Calle) will walk into the apartment and be surprised to find Kyle Abbott (Michael Mealor) working from home for the day. She’ll suggest that they take a “break” together, but he’ll turn her down, and she’ll know that something is really wrong. Later, she’ll confront him about how he’s been different since returning from his trip to San Francisco.

After some prodding, Kyle will finally admit that Summer Newman (Hunter King) kissed him, and that he put a stop to it immediately. Lola will be naturally upset by that news, but she’ll be even more upset because he kept it from her and so he must have a reason to feel guilty about it. She’ll threaten to go to Summer with questions, which will start an argument.

Lola will then accuse Kyle of enjoying the attention he gets from Summer, and Kyle will yell back that Lola needs to admit that Theo Vanderway (Tyler Johnson) is in her head as much as Summer is in his. Lola will be horrified by Kyle’s admission and walk out in disgust.

Next, at Jabot, Summer and Theo will deal with a crisis with an influencer, and Summer will accuse Theo of spending too much time mooning over Lola and not enough time monitoring his influencers. He’ll snark back that she wasn’t focused on work in San Francisco and that he knows that happened there. Later, they’ll continue their conversation at Society, where they’ll argue until Summer admits kissing Kyle on their trip.

After some more arguing, Summer will implore Theo not to run to Lola with news about the kiss, and Theo will say he knows her better than that, and that she really wants him to blow this whole thing wide open. But in the end, he’ll say that he won’t have to say anything – he’ll just wait for the secret to come out on its own. Summer will gripe about how Theo has developed feelings for Kyle’s wife, but Theo will tell her to go ahead and believe what she wants, because she’s going to anyway.

Later, Lola will arrive at Society and spot Theo at the bar. She’ll slowly approach and solemnly ask him if he knows what happened in San Francisco. Theo will say sure, that Kyle and Summer finalized a big deal. Lola will tell him he’s a terrible liar, and that she doesn’t want to discuss it further.

Finally, Kyle will head back to Jabot where he’ll reconnect with Summer. He’ll be distracting himself by working on finalizing their San Francisco deal, and Summer will note that they’ve got this and that he shouldn’t be too careful. She’ll say that they need to move forward, and that’s it their only choice.