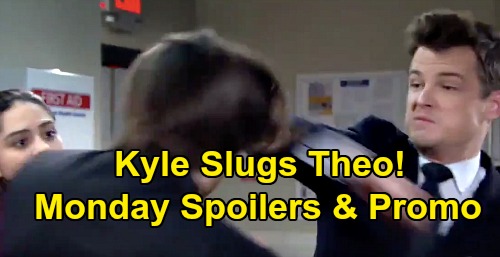 The Young and the Restless (Y&R) spoilers recap for Monday, January 20, teases that Abby Newman (Melissa Ordway) will be all glammed up for her date with “Chance” Chancellor (Donny Boaz). Phyllis Summers (Michelle Stafford) will start needling her about it, but Abby will rant about Phyllis following Chance around like a puppy. She’ll refuse to let Phyllis intimidate her and will ultimately leave with Chance.

Soon after, Abby and Chance will return to the Grand Phoenix. Their reservations were cancelled, so that’ll give Phyllis a chance to pester them some more. Meanwhile, business dinner preparations will get underway. The whole Jabot gang will be meeting at Society, but it won’t be long until Y&R drama erupts.

Summer will fret about what they’re going to do, but Lola will suggest she could use her food truck. She’ll get Summer on board with the idea while Theo and Kyle start bickering. Jack will interrupt to introduce Theo to Jill Abbott (Jess Walton). Jill will lead Theo away to tell him some stories about his grandfather.

That’ll leave Jack to offer Kyle a warning. He’ll feel like Kyle needs to accept that Theo’s part of the family now. A little later, Jill will notice Theo riling Kyle up. She’ll tell Jack that Theo’s dangerous in a good way, so it sounds like she’ll admire his spunk.

Once the dinner portion of the evening’s over, Jack will give Kyle an introduction. Kyle will address the crowd as he thanks Summer and then Theo – reluctantly of course. Afterward, Kyle will find Theo in the kitchen with Lola. When Kyle hears Theo call Lola an amazing woman, he’ll fly into a rage and punch Theo in the face.

Theo will fall to the floor, but Lola will make sure he’s OK before helping him back on his feet. She’ll be furious as she wonders why Kyle was thinking. Theo will exit the kitchen and fill Summer in on Kyle’s outburst. He’ll insist Kyle’s upset for no reason since he hasn’t crossed any lines with Lola. However, Summer will be curious just how far Theo intends to go.

Back with Kyle and Lola, The Young and the Restless spoilers say they’ll have a heated confrontation. Kyle will feel like Lola’s oblivious to Theo’s manipulation tactics, but she won’t think Kyle’s being fair. Lola will suggest Kyle can’t just understand Theo’s perspective, so Kyle will snark that Lola can.

Lola will point out that she trusts Kyle when it comes to Summer, but he’ll think things are different with Theo. Kyle will think Lola’s getting played here. He won’t think Lola’s doing anything to shut Theo down either. While Kyle leaves in a huff, Chance and Abby will make it to Crimson Lights. They’ll dance to the jukebox before heading back to the hotel, where Chance intends to take Abby up to his suite for a drink.

Phyllis will spot Chance and Abby getting on the elevator, so she’ll put a sneaky plan in motion. She’ll be in a robe when they come back down to the lounge following the fire alarm. Chance will mention that the security system’s set up to get blue dye on the alarm-puller. Phyllis’ hands will be clean, but she’ll suggest she hopes Chance and Abby’s night wasn’t spoiled.

Later, Phyllis will secretly take some gloves out of her pocket. Naturally, the gloves will have blue dye all over them. At Mariah Copeland (Camryn Grimes) and Tessa Porter’s (Cait Fairbanks) apartment, Mariah will call Tessa again. She’ll wonder why Tessa didn’t pick up when she gets a text, which urges Mariah to sign for something Tessa sent.

Mariah will open the door to find Tessa herself standing there. It turns out she’s Mariah’s special delivery. Once Mariah pulls Tessa into a hug, they’ll sit on the sofa and acknowledge how much they miss each other. Tessa will admit she can only stay for couple hours, so Mariah will think they better make the most of them.

After making love, Mariah will suggest this time with Tessa was exactly what she needed. Tessa will wonder if Mariah’s OK. She’ll push Mariah to tell her what’s going on, but Mariah won’t be certain it’s her secret to share. After reassuring Tessa about discussing it later, Mariah will open up about her insecurities. She’ll admit part of her was afraid Tessa wouldn’t come back.

Tessa will promise she loves Mariah and wouldn’t do that. Mariah will reflect on how people that love you still leave sometimes – clearly thinking about Sharon Newman (Sharon Case) and her cancer diagnosis. However, Mariah will keep that diagnosis under wraps as she bids Tessa farewell once again.

At Sharon’s place, she’ll take a breather from all the cancer drama and try to focus on movie night with Rey Rosales (Jordi Vilasuso). They’ll eventually bail on the movie idea and play cards instead. Rey will get Sharon laughing over a game of gin rummy, so she’ll appreciate the distraction.

Sharon will confess that her mind keeps racing from being hopeful to total despair. Rey will eventually bring Faith Newman (Alvvia Alyn Lind) back to her mom’s place, so Sharon will pep up again. The Young and the Restless spoilers say Sharon’s family will continue to have her back during this crisis.

It sounds like another great episode’s ahead. We’ll give you updates as other Y&R news comes in. Stay tuned to the CBS soap and don’t forget to check CDL often for her latest Young and the Restless spoilers, updates and news.