BY hellodrdavis on January 20, 2020 | Comments: one comment
Related : Soap Opera, Spoiler, Television, The Young and the Restless 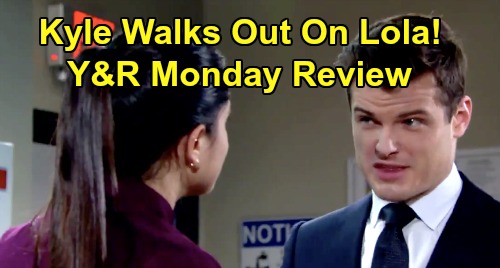 The Young and the Restless spoilers review for Monday, January 20, tease that Abby Newman (Melissa Ordway) will arrive at the Grand Phoenix all dressed up, which will immediately pique Phyllis Summers’ (Michelle Stafford) interest. The two women will verbally spar as Phyllis learns that Abby and Chance Chancellor (Donny Boaz) have a big date night planned for the evening.

Abby will let Phyllis know that she’s seen how Phyllis follows Chance around like a puppy, and that she told Chance to go for it if he’s interested. Chance will soon arrive, and he’ll tell Abby all about how he’s taking her to an exclusive restaurant downtown, then out for live music.

And of course, Phyllis will hear all of this. Later, Chance and Abby will be back at the Grand Phoenix, as their restaurant reservation “accidentally” got canceled.

Phyllis will be on hand to offer her condolences and snark, but Abby will say that they found a little burger joint instead and had a great time.  Turns out, their plans for live music will be a bust, too, as the lead singer for the band will end up sick.

Still, Abby and Chance will make the most of their evening, and they’ll dance to the jukebox music at Crimson Lights instead. Abby will muse about how Chance came into her life, literally dropping out of the ceiling at the hotel.

They’ll then head back to the Grand Phoenix again, where Chance will invite Abby up to his suite for a nightcap.

But that will be short-lived, as Abby will have a crisis to face as the fire alarms go off at the hotel. Abby, Chance, and Phyllis (who will be donned in a fuzzy robe) will wind up in the lobby and Phyllis will watch with amusement as Abby has to deal with the firefighters and all of the chaos.

Abby will suspect that Phyllis may have pulled the fire alarm, but Phyllis will act all innocent.

Chance will then tell Phyllis that because of his new security system, anyone who pulls the fire alarm will get blue dye all over them. Phyllis will show Chance her hands, which are clean and dye-free, then seductively ask him if he needs to see more while pulling back her robe.

Later, after Chance goes back upstairs alone, Phyllis will pull some dye-stained gloves out of her robe pocket.

Next, on the new episode of Y&R on Monday, January 20, Lola Abbott (Sasha Calle) and Summer Newman (Hunter King) will bicker as they prep for a private party at Society that Jabot is putting on for the marketing team.

Jill Abbott (Jess Walton) will then arrive, and she’ll meet Theo for the first time. She’ll note that she was quite fond of Stuart Brooks (Robert Colbert), which will interest Theo.

Jill will seem charmed by Theo, which will irk Kyle. Later, Jill will tell Jack that Theo is quite the addition to the family and that he’s young, hungry, and self-assured.

Meanwhile, Lola and Summer will privately discuss a kitchen disaster. Turns out, the electricity in the kitchen will be out, and together they’ll decide to bring in Lola’s old food truck to use as an impromptu kitchen, then serve dessert out of the truck as a special way to cap off the evening for the marketing dinner.

Jack will say a few words to the marketing group, followed by Kyle, who will gush about how Summer has led the marketing department and taken them to the next level.

Lola will notice this, but she’ll take the high road and let it go. Then, Kyle will thank Theo through gritted teeth, offering a backhanded compliment about how he’ll continue to “show us what he’s capable of.”

As Kyle’s speech concludes and he offers a toast to the group, he’ll notice Theo follow Lola into the kitchen. Kyle will make an angry beeline to the kitchen, where he’ll overhear Theo tell Lola she’s an amazing woman.

And with that, Kyle will deck Theo, to Lola’s horror. Theo will get up, argue with Kyle a bit, then leave, and Lola will turn to Kyle wondering what’s wrong with him.

Lola will tell Kyle what he did was wrong, and Kyle will yell back that it’s obvious that Theo is manipulating her. They’ll argue with raised voices for a while, and then Lola will say that Kyle will never see Theo’s point of view because he views Theo as “not a blue blood.”

That will infuriate Kyle, who will be angry that Lola believes she and Theo are similar in that respect.

Kyle will say that it’s different because Theo is playing Lola, and he’ll slam Lola for not doing anything to discourage Theo. Kyle will then leave, as Lola reels from Kyle’s angry words.

Relationships are tested this week on #YR! pic.twitter.com/TEFSzoUIML