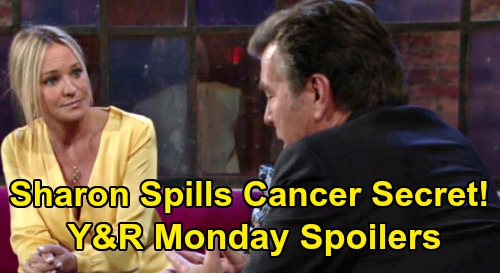 The Young and the Restless (Y&R) spoilers for Monday, March 2, tease that Nikki Newman (Melody Thomas Scott) will worry about her daughter. Victoria Newman (Amelia Heinle) is out of her coma and will soon be recovering at the ranch. Nikki will keep a watchful eye on Victoria, but that won’t stop her from fretting about her recovery.

Victoria has endured an incredibly traumatic ordeal, so this is about more than just getting over her physical injuries. The emotional aspect will be just as important. Y&R fans know Victoria already went through a rough time thanks to abusive J.T. Hellstrom (Thad Luckinbill). Although J.T.’s brain tumor was eventually revealed as the cause of his awful behavior, that doesn’t change what Victoria went through.

Now Victoria has become a victim once again – albeit through a case of mistaken identity. Victoria’s bound to feel uneasy once she gets updates on Ripley Turner (Christian Keyes), who’s still out there somewhere.

A little added security never hurts! Although Victoria will face some mental anguish over this ordeal, there’s some good news headed her way. The Young and the Restless spoilers say Reed Hellstrom (Tristan Rogers) will return on Monday.

Reed will be concerned for his mom and curious about how this even happened. It was supposed to be a fun gala to celebrate Newman Enterprises, Victor and all his accomplishments.

No one ever expected it’d end in a brutal stabbing, but at least Victoria survived and can bounce back from this. Reed, Nikki and the rest of Victoria’s loved ones will just have to make sure she doesn’t push herself too hard.

Other Young and the Restless spoilers say Sharon Newman (Sharon Case) will find a new confidant. She’s been keeping her breast cancer diagnosis quiet, but she’s slowly been opening up to certain Genoa City residents.

Jack Abbott (Peter Bergman) will be the next Y&R character to learn Sharon’s secret. You can bet Jack will be just as supportive as everyone else in the secret circle.

“Team Sharon” is growing, so it’s great that Sharon will have even more of a support system. Don’t forget to stop by CDL for more Y&R updates and news. We’ll always have the hottest Young and the Restless spoilers for you.