The Young and the Restless Spoilers: Sharon & Nick Reunion Twist Follows Cancer Battle – Rey & Phyllis Lose Out, ‘Shick’ Back On? 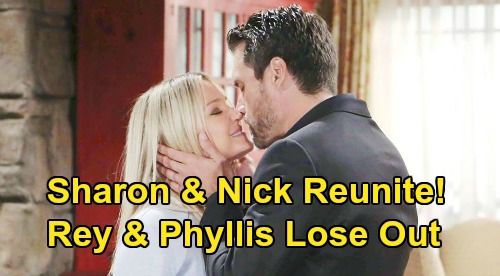 The Young and the Restless (Y&R) spoilers tease that Nick Newman (Joshua Morrow) will once again find himself with a busy schedule. It looks like Victor Newman (Eric Braeden) will convince Nick to get back on the throne at Newman Enterprises. Faith Newman (Alyvia Alyn Lind) is also still in town, so Nick will have to deal with all the typical teen drama.

Summer Newman’s (Hunter King) reunion with Kyle Abbott (Michael Mealor) has also left Nick uneasy. He made Summer promise to protect her heart, but that may not be possible. Summer is madly in love with Kyle, so there’s obviously the potential for devastation if things don’t work out. Nick will be waiting to pick up the pieces if that’s the case.

However, Nick won’t break a promise of his own. Y&R viewers know Nick vowed to be there for Sharon Newman (Sharon Case) and is firmly on her team. He’ll be busier than usual in the months ahead, but there’s no way he’ll toss Sharon aside. Sharon obviously has Rey Rosales (Jordi Vilasuso) in her corner, but she needs all the support she can get.

Many “Shick” fans out there can’t help but hope this might lead to a reunion. Sharon and Nick seem like soulmates; they have the kind of love story that never really ends. We have no doubt that Nick and Sharon will find their way back to each other at some point. They always do! It’s just a matter of how soon it’ll happen.

Sharon is too caught up in this cancer crisis for a “Shick” reunion right now. The Young and the Restless spoilers say Sharon’s battle is supposed to last through at least October. Of course, Sharon could easily grow closer to Nick along the way.

Nikki Newman (Melody Thomas Scott) is putting her old feud with Sharon to rest at the moment, so this is the perfect opportunity for Nikki to actually root for “Shick.”

Could Nick and Sharon reunite at the end of this difficult journey? Sharon will certainly face some changes mentally, physically and emotionally. A crisis like this can prompt some soul-searching and major inner shifts.

If there comes a time when it looks like Sharon might not win this battle, that could pull Nick closer as well. The thought of losing Sharon could remind Nick of how deep his love runs.

Rey and Sharon have decent chemistry, but many Y&R fans think Nick and Sharon are tough to beat. They have the perfect combination of chem and nostalgia. Nick and Phyllis Summers (Michelle Stafford) arguably just don’t have the same magic.

The Young and the Restless spoilers, updates and news say Nick will remain a key player in Sharon’s cancer story. There’s always a chance it’ll lead to something more than friendship down the road. If so, Rey and Phyllis may lose out!

Would you like to see Sharon and Nick reunite? Do you think they’re each other’s perfect match? As other news comes in, be sure to pop over to CDL and check out all our Young and the Restless spoilers and updates.