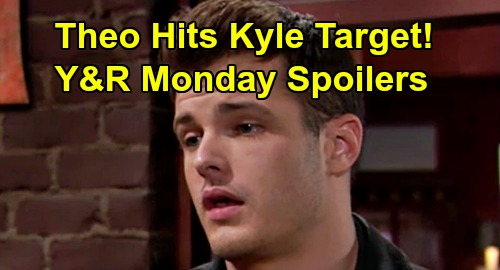 Of course, Kyle often knows how to push Theo’s buttons right back. There’s no end in sight when it comes to this war, so expect Theo to keep at it on Monday. The Young and the Restless spoilers say Theo will want some dirt he can use to his advantage. He’ll hope to get the goods on Kyle and make a mess for his cousin.

Theo once held the New York secret over Kyle’s head, but that was so lame that Y&R ultimately brushed it under the rug. Taking an underage drunk girl to the hospital really wasn’t a big deal. Since Lola and Kyle aren’t together anymore, that secret holds no power. Summer Newman (Hunter King) already knows – and Y&R spoilers indicate that Theo will search for dirt that’s new to him anyway.

What will Theo uncover that might work in his favor? Time will tell, but there’s a good chance Kendra will help him out with his plan. Theo and Kendra have teamed up on a takeover plot, but Lola’s bound to grow increasingly suspicious of their connection. Just because Theo thinks he’s slick doesn’t mean he is! There are sure to be some close calls and some eventual blunders.

In the meantime, Billy Abbott (Jason Thompson) will face off with Victor Newman (Eric Braeden). Their deep issues will rise to the surface and explode in some fierce conflict. The Young and the Restless spoilers say Victor will end up delivering a harsh ultimatum. It’s clear that Victor won’t be messing around!

Will Victor’s ultimatum involve business, family or both? Since Victoria Newman (Amelia Heinle) is hospitalized with chest pains on Friday, perhaps Victor won’t approve of Billy’s attempts to reach out and help. In Monday’s episode, Victor might warn Billy to back off or else! You can bet Victor will remain quite protective of Victoria, who’s clearly still dealing with major trauma.

It’s also possible Billy’s new role at Chancellor Media will come up. They just took over Nick Newman’s (Joshua Morrow) old Dark Horse space, which brought some clashing between Nick and Billy. It might be Billy and Victor’s turn to spar over that soon.

Jill Abbott (Jess Walton) created this media division as a way to stay relevant and keep up with Newman Enterprises, so that seemingly set the stage for a business battle. As other updates come in, we’ll offer the latest Y&R news. Stay tuned to see Victor’s intimidation tactics and check back here at CDL for other hot Young and the Restless spoilers, news and updates.