The Young and the Restless Spoilers: Sharon Life-or-Death Test Results – Braces For The Worst, Pushes ‘Team Sharon’ Away 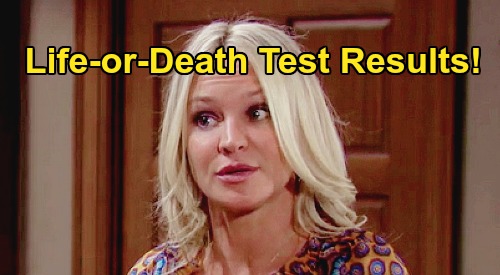 The Young and the Restless (Y&R) spoilers tease that Sharon Newman (Sharon Case) will get a crucial phone call from her doctor. The results of an important scan will be in – and they could mean the difference between life and death! Y&R fans know Sharon’s been undergoing chemotherapy as part of her breast cancer treatment, so it’s almost time to find out if her chemo sessions are working.

Naturally, this is a huge deal for Sharon and a vital part of this storyline. The plan is to shrink the tumor so that it’s small enough for surgery down the road. Sharon will certainly worry that the chemotherapy hasn’t paid off, but “Team Sharon” will step up as usual. The Young and the Restless spoilers say Sharon will have her support system she prepares to head to her appointment.

However, Sharon will ultimately decide she doesn’t want that support – not in this exact moment anyway. Rey Rosales (Jordi Vilasuso) and Mariah Copeland (Camryn Grimes) will be taken aback when Sharon insists on flying solo just this once. Sharon will want a chance to process whatever the results may be before she shares them with anyone else.

Of course, Mariah recently decided to join Tessa Porter (Cait Fairbanks) on tour, but she assured Sharon she’d be checking in regularly. Mariah also pointed out that she could come back if Sharon needed her, so it seems Mariah may fly home thinking this is one of those times. The tour’s only supposed to last through spring break, but Mariah won’t want to neglect her mom during the rough stuff.

Although Sharon will indeed want Mariah and Rey to lean on in the aftermath, she’ll stand her ground on going to this appointment alone. It sounds like Rey and Mariah will wait elsewhere for updates. Since we know Sharon’s scan results will be revealed during the week of March 30-April 3, we should consider what those results are going to be.

There’s no official word on that yet, but Sharon is obviously going to survive her cancer battle. This is a story of healing and hope – although Y&R will continue to show the realistic struggles of this illness.

It seems likely Sharon’s chemotherapy will work, even if the results perhaps aren’t as significant as her doctor would like. It might be a case where Sharon can be cautiously optimistic.