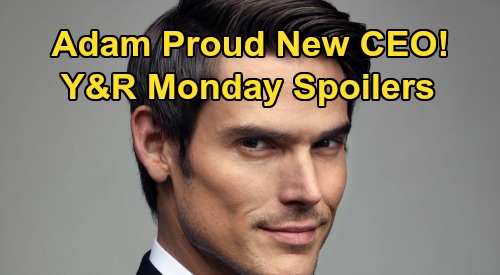 The Young and the Restless (Y&R) spoilers for Monday, March 9, tease that Genoa City will finally start to thaw out! This has been one incredibly long ice storm, so Y&R fans are probably ready to move things along. Fortunately, it looks like Monday’s episode will bring the morning after all the nasty weather. As the sun rises, it’ll leave several GC residents ready to start fresh.

In Amanda Sinclair’s (Mishael Morgan) hotel suite, she’ll stir and find Billy Abbott’s (Jason Thompson) arms wrapped around her. Amanda will feel surprisingly comfortable with Billy’s close embrace. She’ll ultimately drop a hint to Billy about breakfast, so he’ll get room service on the line while she showers.

While Billy awaits Amanda’s return, he’ll have a lot to mull over. Billy can’t confide in anyone else the way he confides in Amanda. He doesn’t feel like has to put on any kind of act around her. Billy may even like the fact that Amanda needs him. He certainly hates what Amanda’s been through, but he must like the thought of being useful to someone.

Billy’s loved ones view him as a screwup who needs to be saved – at least that’s how he perceives the situation. Amanda’s a lost soul like Billy is, so they’ve established a connection that Billy wants to deepen. Y&R spoilers, news and updates say Billy and Amanda will enjoy chatting over their morning munchies, so Billy will think the time is right for a kiss.

Once Billy locks lips with Amanda, he’ll have realization that leaves him taken aback. It’s possible Billy won’t be very into the kiss. This might make Billy realize they were right about sticking with friendship. On the other hand, Billy’s realization might be that he was right to go for it.

He could feel a spark and determine that Amanda’s what he’s been searching for. Either way, The Young and the Restless spoilers point to this kiss complicating things for Amanda. There’s a chance Billy and Amanda won’t quite be on the same page afterward.

Across town, Victor Newman (Eric Braeden) will make big changes as Newman Enterprises. Now that the storm’s past, Victor will want to get down to business – and that means putting a new temporary CEO in charge.

Although Victor still can’t trust Adam Newman (Mark Grossman) completely, it seems Adam’s done enough to secure the CEO spot for now. The Young and the Restless spoilers hint that Nick Newman (Joshua Morrow) may cause another shakeup eventually, but Adam deserves a shot.

Victor will have some interesting ideas on how to boost the family biz, but Adam’s sure to have a few of his own. That could lead to some clashing as the week progresses, so don’t miss all the Newman action! Other news will come in soon, so stop by CDL often for Young and the Restless spoilers and updates.