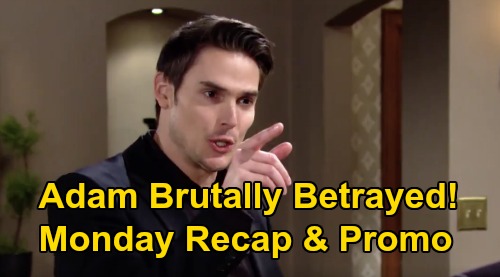 The Young and the Restless (Y&R) spoilers recap for Monday, March 9, teases that Phyllis Summers (Michelle Stafford) will remain at Nick Newman’s (Joshua Morrow) place following the ice storm. They’ll reflect on the surprise steaminess last night before sharing a kiss, but Christian Newman (Alex Wilson) will come running in and break things up.

Phyllis will decide she should leave, but she’ll offer some parting words of wisdom before she goes. She’ll think Nick needs to change his mind about stepping up as Newman’s CEO.

Y&R spoilers say Nick won’t want to get sucked back in, but Phyllis won’t think that’s going to happen. She’ll argue that Nick is his own man and can handle himself.

Phyllis will point out that a lot of damage could be done with Adam Newman (Mark Grossman) at the helm. She won’t think Nick wants anyone getting hurt, especially not Victoria Newman (Amelia Heinle).

At the ranch, Adam and Victor Newman (Eric Braeden) will discuss Connor Newman (Judah Mackey) as well as their resolved conflict. Unfortunately, that conflict will start back up again moments later.

Nick will call to reveal he’s accepting the CEO spot after all, so Victor will relay the news to Adam. Y&R spoilers say Adam will fly into a rage over his brother’s move. He’ll feel like Nick’s only doing this so he can’t have the job. Adam will feel like Victor played him, stabbed him in the back, and he certainly won’t be happy about it.

Once Nikki Newman (Melody Thomas Scott) walks in with Chelsea Lawson (Melissa Claire Egan), Adam will declare that they may not be able to come back from this. He’ll really be fuming over Victor stabbing him in the back.

After Adam and Chelsea exit, Nikki will grill Victor about his true intentions. Victor will admit he had caved and was going to give the CEO spot to Adam, but Nick was his first pick.

At Crimson Lights, Phyllis will bump into Chelsea and trade barbs with her. Since Phyllis will be looking rather slouchy in a sweatsuit, Chelsea will suggest she’s dressing “real sharp” these days. She’ll guess the stress of running the hotel must be getting to her, but Phyllis will point out that she just spent the night at Nick’s house.

Talk will turn back to Phyllis’ Grand Phoenix victory. She’ll insist she outplayed Chelsea and took back what was rightfully hers. Phyllis kept playing the game, which is why she wins and Chelsea loses. Once Phyllis returns to her suite, she’ll notice a discarded towel and figured out that her thumb drive’s missing.

Phyllis will also see that her laptop’s been doused with water, so she’ll seemingly realize Chance Chancellor (Donny Boaz) and Abby Newman (Melissa Ordway) were behind this. She’ll suggest that they think they’ve won, but they should think again.

Back with Chelsea, she’ll head home to Adam and prove she knows her fiancé quite well. Chelsea will assume Adam’s going to want revenge on Victor – and she’ll be completely on board. As for Nick, he’ll meet up with Victor and contend that he only accepted the CEO spot because it’s temporary. Victor will provide updates on Adam and will be eager to get down to business.

At Society, Summer Newman (Hunter King) and Kyle Abbott (Michael Mealor) will wake up to see Lola Rosales (Sasha Calle) sleeping in Theo Vanderway’s (Tyler Johnson) arms. Kyle will glare in their direction, but Summer will think they should just go.

Once Lola’s alone with Theo, she’ll confess she knew Kyle was watching. Lola will like the fact that she riled Kyle up a bit, so Theo will be pleased over Lola’s edge. When Theo tries to steal a kiss, Lola will shut him down.

Lola want to pump the brakes until she makes a decision about their next step. Theo will respect that and assure Lola she’s worth the wait.

Theo will take jabs about Kyle and Summer leaving Society without even thanking Lola. He’ll argue that he’s going to be there for Lola since Kyle couldn’t.

The Young and the Restless spoilers say Kyle will question Theo’s motives. He’ll wonder if this is really about Theo’s interest in Lola or if he’s just trying to mess with him. Theo will insist that Lola’s special, but he’ll enjoy the bonus of irritating Kyle.

Back with Summer, she’ll visit Society to retrieve her scarf. Lola will think maybe Summer had something else to say. Summer will end up warning Lola about Theo being a user, but she’ll admit Lola brings out a new side of him. She’ll contend that she’d be happy for Theo and Lola if they became an item.

In Amanda Sinclair’s (Mishael Morgan) hotel suite, she’ll awaken next to Billy Abbott (Jason Thompson) and reflect on finally getting a good night’s sleep. After Amanda showers and Billy calls for breakfast, Amanda will talk about the freedom she’s found now that Ripley Turner’s (Christian Keyes) locked up.

Billy will feel like he’s found a similar freedom with Amanda. She’ll think it’s complicated, but Billy will suggest it feels right. He’ll plant a kiss before Amanda responds with a deeper one.

Afterward, The Young and the Restless spoilers say they’ll agree Billy should probably head out. Amanda will sit on the bed deep in thought as Billy looks just as thoughtful in the corridor.

They both have a lot to consider, so stay tuned to see how they handle this tricky situation. Check back frequently here at CDL for the latest Young and the Restless spoilers, updates and news.