BY Annemarie LeBlanc on March 9, 2020 | Comments: one comment
Related : Soap Opera, Spoiler, Television, The Young and the Restless 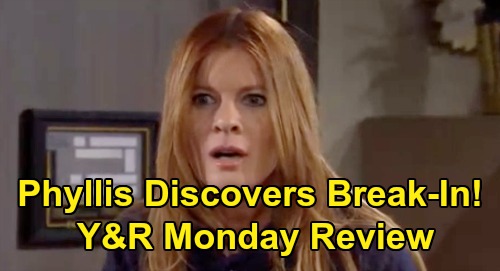 The Young and the Restless spoilers review for Monday, March 9, tease that Nick Newman (Joshua Morrow) and Phyllis Summers (Michelle Stafford) will regroup the morning after the ice storm. Before Phyllis takes off, she’ll urge Nick to take the CEO spot at Newman Enterprises, and he’ll balk at first, but he’ll seem moved when she asks him if he can live with Adam Newman (Mark Grossman) running the family company.

Phyllis will head back to her room at the Grand Phoenix, and she’ll spot a used towel on the floor. She’ll be confused for a moment, then she’ll race to her side table drawer and frantically search for her thumb drive. She’ll reel when finds it missing, then again when she finds her laptop soaked with water. She’ll fume, saying, “You think you’ve won…think again.”

Meanwhile, over at the Newman ranch, Adam and Victor Newman (Eric Braeden) will regroup. They’ll talk a bit about Connor Newman (Judah Mackey) and how Victor told him to toughen up. Adam will note that he isn’t pushing Connor to toughen up right now, given everything that he’s been through. Victor will understand, and Adam will say that it is nice to have a conversation where he actually feels heard.

Talk will then turn to the CEO position, and Victor will be in the middle of saying that Adam has the talent and the skillset to take the job when Nick calls. Adam will listen to Victor’s end of the conversation, then wonder who called. Victor will say that Nick has decided to take over as CEO while Victoria Newman (Amelia Heinle) is recovering.

Adam will be immediately peeved and will lash out at his father, noting that Nick walked away from Newman Enterprises years ago. Victor will point out that he had offered the position to Nick in the first place, but Adam will accuse him of manipulating the situation and pretending to offer him the position just to get Nick to take it.

Nikki Newman (Melody Thomas Scott) and Chelsea Lawson (Melissa Claire Egan) will walk in as Adam is ranting about this just being a carrot that Victor dangled. He’ll say that they might not come back from this conflict, and Adam and Chelsea will promptly leave. Once they are gone, Nikki will ask Victor if he had really intended to give Adam the position, and Victor will say yes.

Adam and Chelsea will go back to their penthouse and Chelsea will ask Adam what he’s thinking. He’ll say that his first instinct is to get out of Genoa City and go to the Kansas farm to relax. Chelsea will agree that they can go there to regroup, but that they also need to figure out how to get what Adam wants – respect, trust, and unconditional love.

She’ll tell Adam that she knows he wants to pay Victor back for giving Nick the CEO position. Adam will say yes, but that he figured she wouldn’t be on board with that. Chelsea will say that she’s in this with him all the way, and that she’s going to help him win. We’ll see what Adam and Chelsea cook up for Victor, but given that Adam was recently talking about resurrecting Dark Horse, he may decide to go head-to-head against Nick in business.

Of course, if Adam does go that route, and Chelsea helps him, then that means that Chelsea will be going directly against her ex, since Nick will be Newman’s CEO. That should make for some interesting family conflict. It looks like the battle of the Newmans may be on!

Meanwhile, on the new episode of Y&R on Monday, March 9, Billy Abbott (Jason Thompson) will wake up ahead of Amanda Sinclair (Mishael Morgan), who will still be sleeping in his arms. She’ll awaken and say that she slept incredibly well for the first time since her ordeal with Ripely Turner (Christian Keyes) began. She’ll thank Billy for staying, and he’ll promptly order room-service breakfast while Amanda freshens up.

Later, the two will enjoy coffee and breakfast together, and Amanda will feel free, like she no longer has to look over her shoulder. Billy will beam at her, saying that she’s already on her way. Billy will tell her that he feels free when he’s with her. She’ll remark that their relationship is complicated, and he’ll say that it’s worth taking a chance on.

Billy will lean in for a kiss, prompting Amanda to pause, then give him a longer, more passionate kiss. But instead of going any further, they’ll mutually decide that Billy should go, and he’ll leave. Clearly, if they’re going to embark on a relationship together, these two want to get it right and don’t want to rush things. We’ll see if they wind up moving forward and seeing each other further, but it’s certainly looking that way.

Monday’s episode is full of great drama, so stay tuned! We’ll be sure to provide updates as Y&R news comes in. Stay with the CBS soap and don’t forget to check CDL often for the latest Young and the Restless spoilers and updates.