BY Heather Hughes on January 5, 2020 | Comments: one comment
Related : Soap Opera, Spoiler, Television, The Young and the Restless 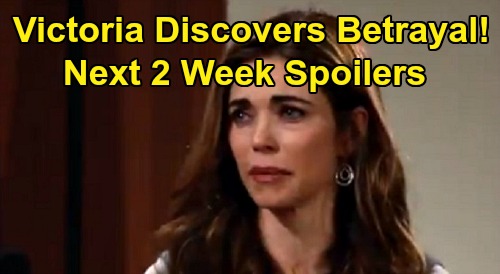 The Young and the Restless (Y&R) spoilers for the next two weeks tease that the drama’s about to rev up in Genoa City. During the week of January 6-10, Sharon Newman (Sharon Case) will continue to hide her cancer concerns from her loved ones. She’ll secretly schedule a mammogram and ultrasound as she prepares to get confirmation.

Rey Rosales (Jordi Vilasuso) will feel like something’s off with Sharon, but he’ll struggle to figure out what the problem is. Meanwhile, Mariah Copeland (Camryn Grimes) will battle fears about her relationship with Tessa Porter (Cait Fairbanks).

Familiar trust issues will creep in after Tessa spills about her buzzed trip to an all-night chapel in Reno, where she married Tanner Watts (Chase Coleman).

Although Tessa connected with Tanner over music, they were really just kids having fun. Mariah’s the one who means everything to Tessa, but the secret will hit Mariah hard. As for Tessa, she’ll talk to Tanner about this risky tour and dive deeper into the changes that have happened in their lives.

Over with Victor Newman (Eric Braeden), he’ll have a demand for Adam Newman (Mark Grossman). Victor’s discussion with Adam will involve rules and whether he’s going to break them. Adam will certainly be willing to if it means putting Chelsea Lawson (Melissa Claire Egan) and Connor Newman (Judah Mackey) first.

Back with Sharon, she’ll reflect on the past as she speaks with Nick Newman (Joshua Morrow). Sharon should keep her potential cancer diagnosis to herself, but she should appreciate having Nick to support her anyway.

Chelsea will divulge her decision to reunite with Adam, but Chloe Mitchell (Elizabeth Hendrickson) won’t think it’s the right one. She’ll call Adam a sociopath, but the pot’s definitely calling the kettle black here!

Chelsea will eventually let herself surrender to Adam completely. She’ll make Adam promise that she’s never going to lose him again before they commit and make love.

Other Young and the Restless spoilers say Billy Abbott (Jason Thompson) will learn some heartbreaking news. Amanda Sinclair (Mishael Morgan) will confide the abuse she suffered at the hands of her ex-fiancé, Ripley Turner.

Billy will later open up to Chloe – perhaps about why he feels closer to Amanda than Victoria Newman (Amelia Heinle) right now.

Victoria will make a shocking discovery at some point, which could involve Billy and Amanda’s growing connection. She’s bound to get the wrong idea, which could lead to her ultimatum during the week of January 13-17.

Will Victoria push Billy to stay away from Amanda or will this ultimatum involve something else? Either way, “Villy” seems to be on the verge of major trouble.

Y&R fans can also expect Nikki Newman (Melody Thomas Scott) to plan a special surprise. She’ll have something exciting she wants to spring on Victor. Over with Abby again, alarm bells will go off courtesy of Phyllis. This may involve “Chance” Chancellor (Donny Boaz) and Phyllis’ attempts to stir the pot.

Nick will give Sharon another dose of support while Devon Hamilton (Bryton James) makes a stunning admission. Will he talk to someone about his Amanda dream or at least acknowledge that he feels complicated things for her? Amanda’s resemblance to Hilary Hamilton (Mishael Morgan) will remain difficult for him to deal with.