BY Heather Hughes on February 6, 2020 | Comments: one comment
Related : Soap Opera, Spoiler, Television, The Young and the Restless 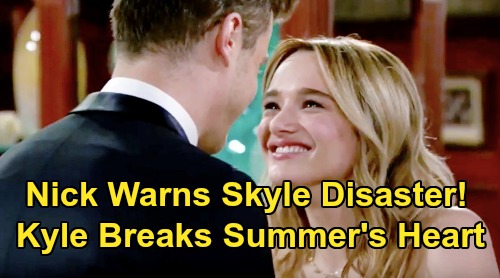 The Young and the Restless (Y&R) spoilers tease that Nick Newman (Joshua Morrow) and Phyllis Summers (Michelle Stafford) will find a reason to bond. They’ll get updates on the end of Kyle Abbott’s (Michael Mealor) marriage and will find out Summer Newman (Hunter King) is the reason why.

Kyle never got over Summer, so his relationship with Lola Abbott (Sasha Calle) has imploded. Although Phyllis thinks Summer is the far better woman, she won’t like the idea of her daughter giving Kyle her heart again.

Since Phyllis is quite the pesterer and will inevitably want to know, Summer will probably admit to her mom that she reconnected with Kyle intimately.

Phyllis may feel like Summer’s better than this. She might scold Summer for making her move so quickly after Kyle and Lola decided to break up. However, Summer will feel like this is all so very destined. In her mind, she was always meant to be with Kyle and is thrilled that he’s realized that, too.

Of course, Nick was furious over the way Kyle treated Summer during their own brief marriage. He’s a protective dad, so he’ll fear that Summer will face a repeat. Nick will hate the thought of Kyle getting Summer’s hopes up and then dashing her dreams.

Nick will at least want Summer to slow down and guard her heart just a tad, but Summer will be too jazzed up about finally getting what she wants.

It sounds like Nick and Phyllis will predict doom and gloom for “Skyle,” but is their view accurate? Will Kyle hurt Summer again or even potentially drift back to Lola?

The Young and the Restless writers have been making things feel pretty final when it comes to “Kola’s” end, but it wouldn’t be the first time Y&R misled the audience. The current regime’s MO is to build to something that doesn’t happen.

It’ll be interesting to see if Summer and Kyle can make this work long-term or if the naysayers are right about it being a disaster. The Young and the Restless spoilers say Nick and Phyllis will hope it works out for Summer’s sake, but they’ll certainly have their doubts!

Do you think Kyle will play with Summer’s heart again? We’ll keep you posted as other Y&R news comes in. Stick with the CBS soap and don’t forget to check CDL often for the latest Young and the Restless spoilers, updates and news.