The Young and the Restless Spoilers: Nina Webster Back In Genoa City as Chance Fights For Life – Tricia Cast Returns To Y&R 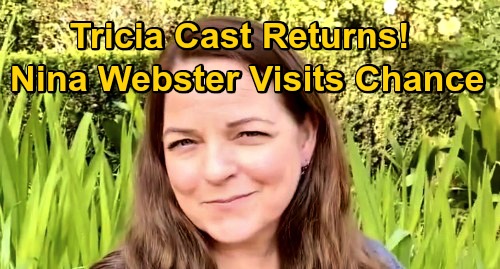 The Young and the Restless spoilers document that Tricia Cast’s (Nina Webster) return to the show is imminent. Longtime fans will see her familiar face, as Nina Webster visits her ailing son, Chance Chancellor (Donny Boaz).

Newer viewers may have seen this character during the later spring and summer, when classic episodes were being shown. Cast was a regular cast member from the mid-1980’s through the early 2000’s and again from the late 2000’s toward the mid 2010’s.

The studio shutdown that took place earlier this year prevented Y&R employees from being able to create new episodes. So, the networks that broadcast daytime’s number one steamer began running many months of reruns that were dubbed classic episodes.

Y&R’s storied and extensive historical library was on display for all who watched the original shows and for newer viewers, who gained valuable backstory knowledge.

Specifically regarding Nina, she is the character who was Christine Blair’s (Lauralee Bell) friend. Nina came to be involved with Phillip III, who is the son of the one-time Jill Foster Chancellor (as most recently played by Jess Walton), who modern viewers know as Jill Fenmore Abbott. Phillip Chancellor II (Donnelly Rhodes) was his father.

Rhodes’ character was the husband of Katherine Chancellor (Jeanne Cooper), during the period when Jill (as originally played by Brenda Dickson) became involved with him. That storyline remains one of, if not the most epic and impactful in Y&R’s history, as the fallout from that marital strife, Phillip II’s accidental death in a car accident, where the alcoholic Katherine was behind the wheel, and Katherine’s resulting rivalry with Jill, which later turned into a friendship, still reverberates in GC.

Young And The Restless Spoilers – Nina Webster Back For A Bit

Cast is scheduled to be seen this month, as she’s come to comfort Chance. Boaz’ character is fighting for his life, after taking a bullet for Adam Newman (Mark Grossman).

The later part of Cast’s run on the show included the reveal of her other son, Ronan Malloy (Jeff Branson). The character Branson portrayed in the early 2010’s was stolen from Nina at birth in the 1980’s.

Cast is also set to be part of Y&R’s milestone twelve-thousandth episode, with Nina’s stay in GC extending at least through November.

Life changed in an instant for Abby Newman (Melissa Ordway), who agreed to become Chance’s wife just prior to him taking the assassin’s bullet. As viewers recall, she was leery of her fiance’s decision to work for Paul Williams (Doug Davidson) in the GC Police Department.

Surely the drama that’s playing out will allow Abby an opportunity to bond with one of Y&R’s legacy characters, who should soon become her mother-in-law. Both ladies, who knew each other when Nina was previously living in town, love Chance. He’ll deeply value their shared concern as his health improves.