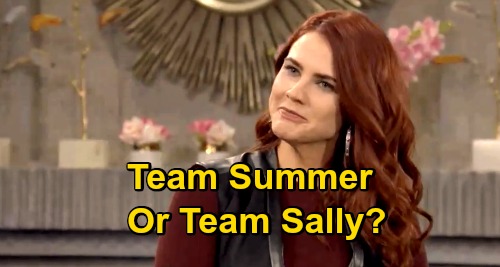 The Young and the Restless spoilers document that Summer Newman (Hunter King) has identified someone who is likely to become her new rival. Sally Spectra’s (Courtney Hope) arrival in Genoa City, Wisconsin, began with the conversation she had with Summer. However, that introduction produced suspicion, rather than the start of a friendship.

Kyle Abbott (Michael Mealor) divorced Lola Rosales (Sasha Calle) and was set to marry Summer. King’s character agreed to do so and was even on board with elopement, but then pulled the plug.

It would seem that the new triangle eventually projects as Summer, Kyle, and Sally, who would be swapping in for Lola. A clear Theo Vanderway (Tyler Johnson) element will be incorporated for a short time as well, though unfortunately this solid actor announced that he’s already departed the cast.

Young And The Restless Spoilers – Kyle Abbott Is Agitated Again

Summer agitates Kyle, more than pleases him. His sense of her has shifted back and forth since Y&R recast the role and hired Mealor.

King returned to the cast in the later part of the last decade after being a sporadic player for a few years while she was part of the cast of Life In Pieces. Summer’s write-back included the character’s transformation from a likeable human being into someone Kyle initially didn’t want to be around.

Eventually Skyle’s enduring bond served to end Kola, which naturally saddened fans of that heavily promoted couple. Now, after having done all that Summer asked, Kyle feels that she’s betrayed his trust again.

Summer’s lack of confidence in herself is exhibited whenever she fronts her aggressive bravado. She wasn’t able to handle Lola’s presence in Kyle’s life because Calle’s alter ego was a self-made person, which contrasted hard against Summer’s birth into wealth.

Choosing to believe that Kyle might still be harboring deep feelings about Lola caused Summer to spy on her intended second-time husband within the last few weeks. Summer than misinterpreted his interaction with Lola because she still uses her feelings to invent perceived facts.

Young And The Restless Spoilers – Sally Spectra Is The Real Deal

Sally lost in Los Angeles, California. She became obsessed with Wyatt Spencer (Darin Brooks), kidnapped the woman he loved, Flo Fulton (Katrina Bowden), and eventually was forced to leave town as a result.

The move to GC has reignited Sally’s life. Fans of The Bold and the Beautiful, or of both shows, know that Sally is a worthy opponent for Summer. Yes, this battle should prove to be engaging.