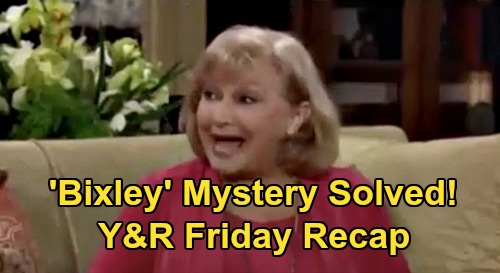 The Young and the Restless spoilers recap for Friday, August 14, tease that Nick Newman (Joshua Morrow) will head to the Newman ranch for some answers about Victoria Newman (Amelia Heinle) being reinstated as CEO at the family company.

Nick will also end up hearing all about how Adam Newman (Mark Grossman) killed AJ Montalvo as an 11-year-old boy. Nick will be upset that Adam was trying to pin the murder on Victor Newman (Eric Braeden), and he’ll reference everything that Adam has done to Victoria recently.

Victor will think that they need to put an end to the cycle of revenge in the Newman family, and Nick will just hope that Adam’s out of their lives for good, but he’ll know better.

After Nick goes, Nikki Newman (Melody Thomas Scott) will suggest that Victor focus on Victoria, who was collateral damage in all of this, but Victor will be miffed about Victoria’s lack of compassion for Adam.

Later, Chelsea Lawson (Melissa Claire Egan) will show up to tell Victor that Adam knows the truth now about what happened with AJ Montalvo.

At Sharon Newman’s (Sharon Case) place, Sharon will balk when Adam asks for help. Sharon will think that she can’t possibly deal with another Newman family power struggle, and Adam will ultimately tell her that he killed someone.

Sharon will be unsure about helping Adam, and suddenly Nick will arrive and want Adam to leave immediately.

When Sharon takes a call, Adam will tell Nick that he’s totally overreacting, and Nick will end up telling Adam about Sharon’s cancer. Adam will be stunned, and an argument will ensue about whether Adam should stay or go.

Sharon will come back to find Adam gone, and Nick will offer Sharon details about what happened when Adam was a boy. Nick won’t want Sharon to help Adam right now when she’s trying to recover from surgery and fight this illness.

Over at Crimson Lights, Mariah Copeland (Camryn Grimes) and Tessa Porter (Cait Fairbanks) will enjoy some time together, as Tessa has set up a nice evening to help Mariah to relax amidst all the stress of Sharon’s illness and recovery.

Soon, Mariah will get a phone message and realize that Tessa has turned down an opportunity to sing at a festival in order to be there in Genoa City. Tessa will explain to Mariah that being there during Sharon’s struggle is what’s most important to her.

At the Abbott estate, Jack Abbott (Peter Bergman) and Ashley Abbott (Eileen Davidson) will discuss Dina Mergeron’s (Marla Adams) agitation and her utterance of “Bixley.” Neither Jack or Ashley will know what “Bixley” means, and Ashley will fret that perhaps it’s another previously unknown sibling.

Soon, Traci Abbott (Beth Maitland) will arrive, and she’ll get brought up to speed and realize that what Dina was saying was “Bixby,” which is the Bixomatic camera that Dina used to record their childhood. Traci will think that perhaps Dina wants to see their childhood movies.

Meanwhile, Nate Hastings (Sean Dominic) and Elena Dawson (Brytni Sarpy) will be enjoying their work together at the clinic, while Devon Hamilton (Bryton James) and Amanda Sinclair (Mishael Morgan) talk over at Society.

Devon and Amanda will bond over their pasts in foster homes, and the topic of Neil Winters (Kristoff St. John) will come up – Devon will say that Neil was a great example for him in making a difference in life. Amanda will think that Neil would be proud of Devon.

Finally, at Adam and Chelsea’s penthouse, Chelsea will tell Adam that she’d like to leave the past where it belongs, and she’ll update Adam on her trip to the Newman ranch.

Adam will say that he needs to deal with the past, and that it’s important that he remember what happened – after all, it could be worse than what Victor and the caretaker said. Chelsea will want Adam to leave it alone, but soon Adam will get a text from Sharon asking how she can help.

It sounds like a lot of Y&R drama is heating up for Friday’s episode, so stay tuned! We’ll give you updates as Y&R news comes in. Stick with the CBS soap and don’t forget to keep CDL at the ready for the latest Young and the Restless spoilers and news.