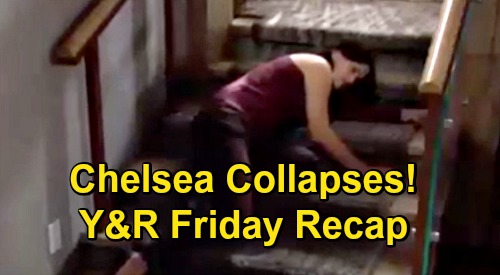 Victor will tell Sharon that Adam has been discharged from the psychiatric facility, and he’ll try his best to persuade Sharon to help Adam some more. Sharon will flatly refuse, saying she’s done with Adam, and that the person Adam needs to be talking to is Chelsea Lawson (Melissa Claire Egan).

Meanwhile, over at Adam’s penthouse, Chelsea and Adam will talk. Adam will say that he was just let go from the psychiatric facility, and Chelsea will say that she just had Thanksgiving with Connor Newman (Judah Mackey).

Chelsea will mention her headaches, and she’ll tell Adam that she wants him and their family back. Adam will be thrilled, and he’ll say that before they leave town for good, there’s something he’s got to do.

Chelsea will worry when Adam says that he needs to see Victor, but Adam will say that it’s about Connor and that Chelsea should go pack him a bag so they can leave immediately after he gets back.

Adam will go, and Chelsea will have more head pain. Chelsea will call Chloe Mitchell (Elizabeth Hendrickson) but won’t leave a message.

Over at the Chancellor mansion, Chloe will be upset over how she gave Chelsea the choice between herself or Adam. Kevin Fisher (Greg Rikaart) will do his best to comfort Chloe. Chloe will end up missing Chelsea’s call, and Chloe will later call Chelsea back but get voicemail.

At the Grand Phoenix, Billy Abbott (Jason Thompson) and Lily Winters (Christel Khalil) will wake up happy after spending the night with each other. Down in the lobby, Christine Williams (Lauralee Bell) will enjoy a morning cocktail with Nina Webster (Tricia Cast).

The friends will catch up, with Christine urging Nina to move back to Genoa City. Nina will say that she’s got a career in Los Angeles, and that he wants to give Chance Chancellor (Justin Gaston) space.

Soon, Lauren Baldwin (Tracey E. Bregman) will arrive, and the three friends will talk happily about old times, then some more about Chance’s wedding and his shooting. Lauren will say that Michael Baldwin (Christian LeBlanc) is doing everything to make sure that the person who shot Chance is brought to justice.

At Society, Billy and Lily will grab breakfast, and they’ll spy Rey Rosales (Jordi Vilasuso) near the bar. Billy will go over and needle Rey about pursing the investigation against him.

Later, Billy and Lily will sit at their table and talk about who might be setting Billy up. Lily won’t think it’s Adam or Victor, and just then, she and Billy will see Michael come in and talk with Rey.

At Newman Enterprises, Victoria Newman (Amelia Heinle) and Victor will each have been summoned by Adam, who will arrive shortly thereafter and say that he wants to make them a deal.

Adam will say that he, Chelsea, and Connor are leaving Genoa City tonight, and that he’ll sign their contract relinquishing his right to all things Newman as long as his inheritance goes to Connor.

After Adam leaves, Victor and Victoria will talk about who the shooter is, and Victor will be convinced that it’s Billy. Victoria will disagree, saying that it could be a setup by Victor.

Meanwhile, over at Chancellor Communications, Billy will be distracted by the thought of Michael and Rey talking at Society. Just then, Rey will come in and place Billy under arrest. Lily will rush out to find Amanda Sinclair (Mishael Morgan).

Finally, back at Adam’s penthouse, Adam will return from his meeting with Victor and Victoria, and he’ll call out for Chelsea. As Adam walks into the penthouse, he’ll see Chelsea collapsed on the staircase.

It sounds like a lot of Y&R drama is heating up for Friday’s episode, so stay tuned! Stick with the CBS soap and remember that CDL is your go-to source for all the latest Young and the Restless spoilers, updates, and news. We’ve got you covered!