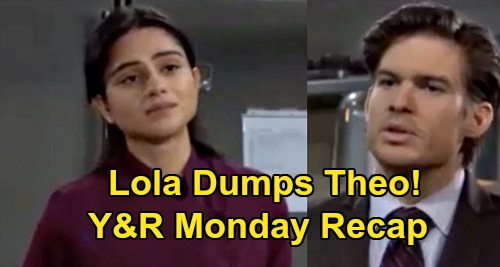 The Young and the Restless spoilers recap for Monday, September 21, tease that Nate Hastings (Sean Dominic) and Elena Dawson (Brytni Sarpy) will talk at Crimson Lights ahead of their shift.

Elena will be worried about whether Devon Hamilton (Bryton James) will be able to stay away from Amanda Sinclair’s (Mishael Morgan) search for information about Hilary Hamilton (Mishael Morgan), and she’ll tell Nate about walking in on Devon’s conversation with Amanda earlier.

Devon will present Amanda with a letter that Hilary wrote to Santa Claus when she was a young girl.

Amanda will read the letter, which will reference Hilary’s desire to grow up and have two kids so that neither would feel alone. Devon and Amanda will tear up, and Devon will give Amanda a copy of Hilary’s birth certificate as well.

Amanda will ask about her birth father, who went to prison the last Devon heard. Amanda will assume that he’s long gone by now.

Things will feel unresolved as Elena leaves, and after she goes, Devon will sigh, obviously drained emotionally.

Later, Amanda will talk with Nate at the Grand Phoenix. Amanda will explain that her interaction with Devon and Elena was awkward, and Nate will say that it’s a big adjustment for everyone.

Amanda will say that she’s not going to push it with Devon any further. Amanda will leave, and after she steps outside, she’ll call Billy Abbott (Jason Thompson) asking if he can talk.

At Sharon Newman’s (Sharon Case) house, Sharon will be feeling upset and cranky over her cancer battle, when Mariah Copeland (Camryn Grimes) comes in to say that she took Faith Newman (Alyvia Alyn Lind) and her friends to the park.

Sharon will explode at Mariah, saying that she was supposed to bring Faith back home. Mariah will leave upset.

Rey Rosales (Jordi Vilasuso) will arrive home as Mariah is driving off, and Sharon will vent to Rey, saying that she unleashed on Mariah unfairly. Sharon will be upset that she’s pushing everyone she loves away, and she’ll apologize for going to see Adam Newman (Mark Grossman) again.

Rey will appreciate Sharon’s words, then he’ll get a text saying that there’s some emergency at Crimson Lights. Sharon and Rey will head to the coffeeshop.

At Chancellor Park, Kyle Abbott (Michael Mealor) and Summer Newman (Hunter King) will meet, each carrying a ring box. While Lola Rosales (Sasha Calle) watches from afar, Summer and Kyle will talk about the cherry-stem engagement ring and their secret engagement. Lola will leave upset.

Kyle and Summer will each get down on one knee and say, “Will you marry me?” Afterwards, Summer will look at her engagement ring, which Kyle had made specifically for her.

Kyle will get an engagement ring too, which he’ll put on his pinky finger. Summer will say that they’ll be partners in all things, and for the time being, she’ll wear her ring on a chain around her neck.

Over at Society, Nick Newman (Joshua Morrow) will join Jack Abbott (Peter Bergman) at his table. After some talk about Sharon’s cancer battle, talk will turn to Summer and Kyle. Nick will have concerns still, while Jack remains optimistic about their union. Jack will point out that Summer has hurt Kyle in the past, just as Kyle has hurt Summer.

In the kitchen, Theo Vanderway (Tyler Johnson) will come to see Lola, who summoned him there. Lola will say that she saw Theo flirting with Chelsea Lawson (Melissa Claire Egan) before, and Theo will explain the business proposition that Chelsea had.

Lola will say that it bothered her, and that Theo’s flirting will bother her again.

Theo will say that Lola can’t take it personally, and Lola will say that she can’t help it, and that they need to stop making each other miserable and get honest about what’s going on.

Lola will tell Theo that they need to stop seeing each other. Theo will get upset as Lola says that she was trying to change him into someone he’s not. “Like Kyle,” Theo will say.

Theo will say that he respected Lola, but Lola will say that it didn’t always feel that way. Lola will attempt to end things on a positive note, saying that Theo helped her through a rough time, but Theo will respond by telling Lola good luck finding a guy who lives up to her lofty standards. Lola will seem hurt by that.

At a table in the dining area, Mariah will talk with Tessa Porter (Cait Fairbanks), telling her about the earlier interaction with Sharon. Tessa will say that Mariah needs to cut herself some slack, and Tessa will say that she fears losing her mother, but that she can’t fix this.

Later, Sharon will walk into Crimson Lights to find Mariah there. Sharon will immediately apologize for being difficult earlier, and Mariah will apologize as well.

Mother and daughter will have a touching moment together, while Rey and Tessa watch from afar. Rey will thank Tessa for her text earlier, and Tessa will say that they just needed to get Mariah and Sharon together.

Monday’s episode sounds terrific, so don’t forget to tune in! We’ll give you updates as Y&R news comes in throughout the weekend, and we’ll keep you current on the latest Young and the Restless spoilers, updates, and news.