The Young and the Restless Spoilers Recap: Thursday, September 10 – Sharon Asleep In Adam’s Bed, Chelsea Shows Up At Motel 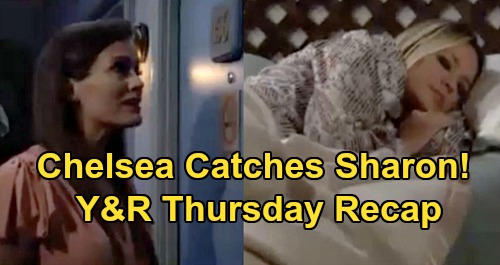 After considerable prodding, Chance will tell Chelsea that Adam was in a hotel room and Sharon Newman (Sharon Case) showed up. Chance will be floored to hear that Chelsea is relieved that Adam is with Sharon, and that Sharon is Adam’s therapist.

Chance will text Chelsea the motel address, but Chelsea will say that she’s not sure that she should go.

Chance will argue that Chelsea needs to go get Adam and bring him home, but Chelsea won’t be so sure. Chelsea will think that perhaps it’s enough to know that Adam is close by.

Chance will strongly urge Chelsea to go get Adam, noting that there was something in Adam’s demeanor that really unnerved him. Chelsea will give that some thought as Chance leaves.

At the motel, Sharon will show up to see Adam and she’ll immediately apologize for lashing out the last time she was there. Adam will think that Sharon should leave, and Sharon will tell Adam that what she needs and wants is important in this equation, too.

Sharon will disclose how the pathology report came back saying that her cancer has spread, and that she needs more surgery, chemo, and radiation.

Later, Sharon will fall asleep on the bed, and Adam will write a note, then leave.

Shortly thereafter, Chelsea will knock on the door to the motel room. The knocking will awaken Sharon, who will quickly realize that Adam’s gone. Chelsea will talk through the door, realizing that Adam might not want to open the door. Sharon won’t know what to do.

At the Newman Ranch, Victor Newman (Eric Braeden) will be feeling melancholy, and he’ll tell Nikki Newman (Melody Thomas Scott) that Alyssa was back in town to punish Adam for killing her father.

Victor will lament that he made a mistake in telling Adam about killing AJ, and he’ll blame himself for not being around more when Adam was growing up.

Nikki will think that Victor shouldn’t blame himself for a grown man’s choices, and she’ll point out that Adam tried to kill Victor recently. Victor will think that Nikki wouldn’t say this if Adam was her flesh and blood, and Nikki will be offended.

Later, Victor will apologize for the remark, and he’ll lament that Adam hates him for the choices he made, and who knows what that means for the future.

At Newman Enterprises, Nick Newman (Joshua Morrow) will stop by to see Victoria Newman (Amelia Heinle). After some small talk, the topic of Victor will come up, and Victoria will rant about how Victor prioritizes Adam over his other children.

Victoria will vent her frustration about Victor giving Adam the CEO spot for a while, and she’ll say that there will be consequences for Adam and Victor.

Nick will wonder what that means, but Victoria won’t cough up any details about it. Ultimately, Nick will leave wondering what Victoria has in store for Victor and Adam.

Thursday’s episode of Y&R sounds terrific, so stay tuned to the CBS soap! We’ll give you updates as Y&R news comes in. Remember, CDL is your go-to source for all the latest Young and the Restless spoilers, updates, and news.